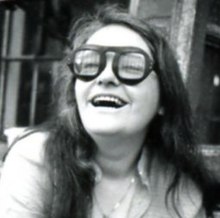 Katherine Murray Millett (September 14, 1934 – September 6, 2017) was an American feminist writer, educator, artist, and activist. She attended Oxford University and was the first American woman to be awarded a degree with first-class honors after studying at St Hilda's College, Oxford. She has been described as "a seminal influence on second-wave feminism", and is best known for her book Sexual Politics (1970), which was based on her doctoral dissertation at Columbia University. Journalist Liza Featherstone attributes previously unimaginable "legal abortion, greater professional equality between the sexes, and a sexual freedom" being made possible partially due to Millett's efforts.

We are women. We are a subject people who have inherited an alien culture.

The lesbian is the archtypical feminist, because she's not into men - she's the independent woman par excellence.

Politics is repetition. It is not change. Change is something beyond what we call politics. Change is the essence politics is supposed to be the means to bring into being.

The involuntary character of psychiatric treatment is at odds with the spirit and ethics of medicine itself.

Life is a publicity stunt. A shill. You've been had.

Ah, but depression - that is what we all hate. We the afflicted. Whereas the relatives and shrinks, the tribal ring, they rather welcome it: you are quiet and you suffer.

To love is simply to allow another to be, live, grow, expand, become. An appreciation that demands and expects nothing in return.

Homosexuality was invented by a straight world dealing with its own bisexuality.

A sexual revolution begins with the emancipation of women, who are the chief victims of patriarchy, and also with the ending of homosexual oppression.

Hostility is expressed in a number of ways. One is laughter.

Monogamy and prostitution go together.

Mother had committed me for life. This is where I felt betrayed the most.

Perhaps patriarchy's greatest psychological weapon is simply its universality and longevity. . . . Patriarchy has a still more tenacious or powerful hold through its successful habit of passing itself off as nature.

They weren't crazy. They were tired of being locked up. Even I could see that.

What is the future of the woman's movement How in the hell do I know I don't run it.

My sister said, You're making it hard for all us housewives in Nebraska.

The concept of romantic love affords a means of emotional manipulation which the male is free to exploit, since love is the only circumstance in which the female is (ideologically) pardoned for sexual activity.

No one should be adored, it's fundamentally immoral.