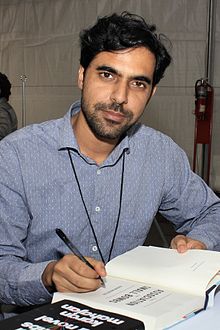 Karan Mahajan (April 24, 1984) is an Indian-American novelist, essayist, and critic. His second novel, The Association of Small Bombs, was a finalist for the 2016 National Book Award for Fiction. He has contributed writing to The Believer, The Daily Beast, the San Francisco Chronicle, Granta, and The New Yorker. In 2017, he was named one of Granta's Best Young American Novelists.

I'm more interested than Philip Roth in understanding women, even if I do it imperfectly. But that book, Portnoy's Complaint, is literary punk in this way that is rare.

I don't think sexual repression leads to violence, but I can see the situation where you're trying very hard to be very religious and to be good but pornography exerts a strong force on you, and one way to get further away from it would be to immerse yourself in a strong religious system.

I also think that there's something about the graphic, political nature of such attacks, mixed with the fact that it all seems completely random to the victims.

Literature has become too psychological. We discount the physical, when in fact much of life is physical. People's personalities are partly formed by, or in response to, how they take up space; the physical mask has some relation, howsoever obscure, to the mental work happening underneath.

It's rare that you get to read, let alone teach, an arbitrary canon of your choosing in a tight time setting, and I tore through a fairly wide range of Indian writers, some contemporary - like Arundhati Roy and Salman Rushdie - and others older, like R. K. Narayan. And I think what happened at that stage was that I was forced to take a position in my own writing style that was more fixed, as opposed to reading a book at a time and defining myself in opposition to or in awe of it.

It's the feeling right from the beginning that the government is not on your side, the government thinks you're going to use this opportunity to cheat them, even though you've just been through this huge trauma.

Feelings, Opportunity, Right, Thinking, Though, Use

Of course I had a piece of luck I couldn't have imagine for myself in a million years: I got an agent. That sped up the process. I'd say it's a good idea, getting an agent.

I have to admit that I was terrified of ending the book, precisely because I go around saying about pretty much every book I read, "It fell apart at the end. " I have friends who are waiting to ridicule me forever.

People in the East get a very skewed sense of America as this enormously rapaciously sexual place, this place where you have rappers and you have Donald Trump and things like that, which leads to a lot of confusion.

But I think the goal of all these attacks is the same, which is to seize maximum media attention. Maybe some of these attacks were meant to be small. Some of them might have been failed larger attacks. And some of them are just part of a new strategy of doing lots of tiny attacks, as opposed to one large one.

I'm pretty private as a person - people generally think they know more about me than they do, because I gregariously advertise what I want known. So it pains me to think people might feel they have an insight into my personal matters, which they most certainly do not.

I think I know a lot of fake two-faced Ivy League liberals, and I am constantly testing them to see if their liberalism is a conversational liberalism, one that depends solely on what will fly at a party. And I can tell when stuff like this happens, I swear to God, they are tomorrow's conservatives.

It's easier to set off a bomb that kills innocent civilians in a market than it is to plot an assassination, but that obviously was true before as well. I also think it's now easier to get attention for a small attack that goes off in a random market. It's almost like there's a marketplace for terror in the media, and these people are supplying the attacks, knowing that the media will cover them sensationally.

How do you prevent attacks from becoming the very fabric of lived life in a city? Of course it's very easy to say you should be fearless and go about your daily life.

terrorism is interesting to a novelist because it's a crime that's driven by an idea, as opposed to some kind of base materialist impulse. It's not like stealing from someone's house, or even assassinating someone. There are very complex ideological reasons behind these almost abstract acts of violence.

The West, in the form of American capitalism, is seen as having won, but people are beginning to offer alternatives again, sometimes in retrograde ways like radical Islam.

For whatever reason, people know that car crashes can happen but they don't live with that fear every day when they're driving, or they're able to overcome it.

There's this great fashion among writers, especially those who follow the transnational conservatives like V. S. Naipaul, to disavow one's place in the world as a sort of box that has sprung you but is only worthy of your scorn, because it once contained you. And I've been tempted to say foolish things, like "I am an American writer" or "I belong nowhere," but the truth is I'm perfectly proud of identifying as an Indian writer, even if that might hurt my bottom line.

I think Indians will pick up on a lot of the direct commentary on Delhi, which Americans will obviously miss, while Americans might get more out of watching pop-culture play out in unusual ways in a foreign country. Who knows?

In India the government is very chaotic and poorly run. They are forced into action by public pressure. When it's a larger event, there's a lot more pressure - to do something, to investigate, to give some kind of compensation to the victims. With the smaller attacks, the pain is concentrated on those affected, because they've not just been forgotten by everyone else, which is normal, they've also been forgotten by the government, which lets the cases drag on for years in the courts.