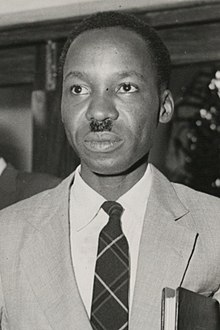 Julius Kambarage Nyerere (Swahili pronunciation: [ˈdʒuːliəs kɑmˈbɑɾɑgə njɛˈɾɛɾɛ]; 13 April 1922 – 14 October 1999) was a Tanzanian anti-colonial activist, politician, and political theorist. He governed Tanganyika as its Prime Minister from 1961 to 1963 and then as its President from 1963 to 1964, after which he led its successor state, Tanzania, as its President from 1964 until 1985. He was a founding member of the Tanganyika African National Union (TANU) party and later a member of the Chama Cha Mapinduzi party. Ideologically an African nationalist and African socialist, he promoted a political philosophy known as Ujamaa.

You cannot develop people. You must allow people to develop themselves.

If a door is shut, attempts should be made to open it; if it is ajar, it should be pushed until it is wide open. In neither case should the door be blown up at the expense of those inside.

Case, Doors, Made, Pushed, Should, Wide

In Tanganyika we believe that only evil, Godless men would make the color of a mans skin the criteria for granting him civil rights.

Having come into contact with a civilization which has over-emphasized the freedom of the individual, we are in fact faced with one of the big problems of Africa in the modern world. Our problem is just this: how to get the benefits of European society - benefits that have been brought about by an organization based upon the individual - and yet retain African's own structure of society in which the individual is a member of a kind of fellowship.

The African is not 'Communistic' in his thinking; he is -- if I may coin an expression - 'communitary'.

Take every penny you have set aside for aid for Tanzania and spend it in the UK, explaining to people the facts and causes of poverty.

No nation has the right to make decisions for another nation; no people for another people.

Small nations are like indecently dressed women. They tempt the evil-minded.

There is no time to waste. We must either unite now or perish.

Independence cannot be real if a nation depends upon gifts.

Decisions made in Washington are more important to us than those made here in Dar es-Salaam. So, maybe my people should be allowed to vote in American presidential elections.

When we were at school we were taught to sing the songs of the Europeans. How many of us were taught the songs of the Wanyamwezi or of the Wahehe? Many of us have learnt to dance the rumba, or the cha cha, to rock and roll and to twist and even to dance the waltz and foxtrot. But how many of us can dance, or have even heard of the gombe sugu, the mangala, nyang umumi, kiduo, or lele mama?

We, in Africa, have no more need of being 'converted' to socialism than we have of being 'taught' democracy. Both are rooted in our past -- in the traditional society which produced us.

Should we really let our people starve so we can pay our debts.