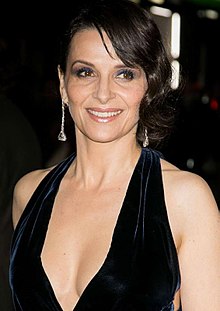 Juliette Binoche (French pronunciation:  [ʒyljɛt binɔʃ]; born 9 March 1964) is a French actress, artist and dancer. She has appeared in more than 60 feature films, been the recipient of numerous international awards, and has appeared on stage and in movies across the world. Coming from an artistic background, she began taking acting lessons during adolescence. After performing in several stage productions, she began acting in films by auteur directors Jean-Luc Godard (Hail Mary, 1985), Jacques Doillon (Family Life, 1985) and André Téchiné, who made her a star in France with the leading role in his 1985 drama Rendez-vous. Her sensual performance in her English-language debut The Unbearable Lightness of Being (1988), directed by Philip Kaufman, launched her international career.

When you make a film, it's a bet. You don't know how the film is going to be, anyway.

If you told me tomorrow that I couldn't act anymore, it wouldn't bother me. I have only one wish: to meet the man of my life.

It's challenging as an actor to let go but I had some pleasure out of it too. To not have the effort of having to present myself is quite liberating.

When I won the Oscar, there was something telling me 'this isn't the truth'. I had to get back to real work.

What I love most about this crazy life is the adventure of it.

Some words, you know, it's amazing but some words would come only in French, and when I speak French, it would only come in English. And so the adjustment is very difficult sometimes.

I won't do something just for the sake of working.

I think acting is about forgetting yourself in order to give the best of yourself. It's passing through you more than you're creating it. You're not the flower, but the vase which holds the flower.

The best mother is the mother who adapts, and the best children are the children who adapt as well.

There is a secret, I think. When you are front of a camera there is something that happens. Some relationship, some movement, some strange kind of suspension. That's where you find the layer in yourself that is duplicated in everyone. And when you get it right, if you can imagine all the hearts beating in one beat, it's like that. It's beautiful.

As actors, we are so privileged to do what we do and to give to the world and to choose the subject we want to say to the world.

Changing someone's life is not the best, is not wanting to change the other life. It is being who you are that changes another's life. Do you understand?

Change, Changes, Life, Life Is, Wanting, Who You Are

My aim was never to be an American star; otherwise, I would have moved to Los Angeles.

I try to see my films just once. It's like a dream you've been through when it's been intense, and you just have to go through it once more just to make sure you've had it.

But I've never felt that being an actress is being in a comfortable place. It's seen from the outside that we're being driven in big cars and having these gorgeous suites and all of that. But come on, it's not about that.

What makes a person sexy is when he's not trying to be sexy.

I like independence, I like creating my own world, not being in a system. There are more possibilities, I think.

I'm very patient and always willing to try things but I have some resistance as well because I have my own vision. I have resistance sometimes because I see a director who's freaking out and wants to have control and they sometimes anticipate about what I'm going to be doing or not.

My only ambition is to be true every moment I am living.