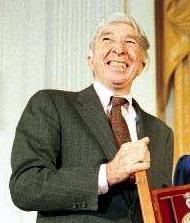 John Hoyer Updike (March 18, 1932 – January 27, 2009) was an American novelist, poet, short story writer, art critic, and literary critic. One of only three writers to win the Pulitzer Prize for Fiction more than once (the others were Booth Tarkington and William Faulkner), Updike published more than twenty novels, more than a dozen short-story collections, as well as poetry, art and literary criticism and children's books during his career.

I would rather have as my patron a host of anonymous citizens digging into their own pockets for the price of a book or a magazine than a small body of enlightened and responsible men administering public funds. I would rather chance my personal vision of truth striking home here and there in the chaos of publication that exists than attempt to filter it through a few sets of official, honorably public-spirited scruples.

My father provided; he gathered things to himself and let them fall upon the world; my clothes, my food, my luxurious hopes had fallen to me from him, and for the first time his death seemed, even at its immense stellar remove of impossibility, a grave and dreadful threat.

We are living in a world in which we don't give the young enough reason to live. The temper and the lyrics of a lot of punk music and so on is very, life sucks and then you die, sort of theory. I feel life is cheaper and death is more attractive now than it was when I was an adolescent, as I remember. Suicide was a personal pathology when it was committed. There was no society approval of it, like there certainly is in Palestine and some quarters of Iraq.

Students present themselves. . . like a succession of CDs whose shimmering surface gives no clue to their contents without the equipment to play them.

Bankruptcy is a sacred state, a condition beyond conditions, as theologians might say, and attempts to investigate it are necessarily obscene, like spiritualism. One knows only that he has passed into it and lives beyond us, in a condition not ours.

Children are not a zoo of entertainingly exotic creatures, but an array of mirrors in which the human predicament leaps out at us.

It's great to have an enemy. Sharpens your senses.

Accent the ugly until it becomes gorgeous.

It's been the same story ever since I can remember, ever since Wilson - the Republicans don't do a thing for the little man.

I would rather be seated between any two women than any two men at a dinner party.

One of the cool, chaste countries - Canada or Sweden.

The creative writer uses his life as well as being its victim; he can control, in his work, the self-presentation that in actuality is at the mercy of a thousand accidents.

Actuality, Creative, Life, Mercy, Self, Use

Until the 20th century it was generally assumed that a writer had said what he had to say in his works.

The essential self is innocent, and when it tastes its own innocence knows that it lives for ever.

A photograph presents itself not only as a visual representation, but as evidence, more convincing than a painting because of the unimpeachable mechanical means whereby it was made. We do not trust the artist's flattering hand; but we do trust film, and shadows, and light.

God is in the tiger as well as in the lamb.

Professionalism in art has this difficulty: To be professional is to be dependable, to be dependable is to be predictable, and predictability is esthetically boring - an anti-virtue in a field where we hope to be astonished and startled and at some deep level refreshed.

Most writers begin with accounts of their first home, their family, and the town, often from quite a hostile point of view-love
hate, let's say. In a way, this stepping outside, in an attempt to judge enough to create a duplicate of it, makes you an outsider. . . . I think it's healthy for a writer to feel like an outsider. If you feel like an insider you get committed to a partisan view, you begin to defend interests, so you wind up not really empathizing with all mankind.