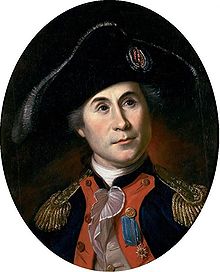 John Paul Jones (born John Paul; July 6, 1747 – July 18, 1792) was the United States' first well-known naval commander in the American Revolutionary War. He made many friends and enemies—who accused him of piracy—among America's political elites, and his actions in British waters during the Revolution earned him an international reputation which persists to this day. As such, he is sometimes referred to as the "Father of the American Navy" (a sobriquet he shares with John Barry and John Adams).

Where men of fine feeling are concerned there is seldom misunderstanding.

I would lay down my life for America but I cannot trifle with my Honor.

I may sink, but I'll be damned if I strike!

I wish to have no connection with any ship that does not sail fast; for I intend to go in harm's way.

You understand why some animals eat their young.

. . . without a Respectable Navy, Alas America!

Nothing exciting ever happens to me.

It is by no means enough that an officer should be capable. . . . He should be as well a gentleman of liberal education, refined manners, punctilious courtesy, and the nicest sense of personal honor. . . . No meritorious act of a subordinate should escape his attention, even if the reward be only one word of approval. Conversely, he should not be blind to a single fault in any subordinate.

It seems to be a law of nature, inflexible and inexorable, that those who will not risk cannot win.

Whoever can surprise well must conquer.

An honorable Peace is and always was my first wish! I can take no delight in the effusion of human Blood; but, if this War should continue, I wish to have the most active part in it.

It is true that I must run a great risk; no gallant action was ever accomplished without danger.

I have not yet begun to fight!

He who will not risk cannot win.