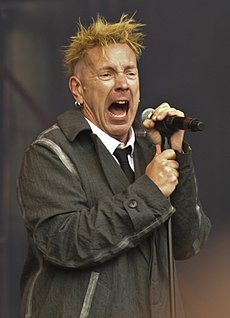 John Joseph Lydon (born 31 January 1956), also known by his stage name Johnny Rotten, is an English singer, songwriter and musician. He is best known as the lead singer of the late-1970s British punk band the Sex Pistols, which lasted from 1975 until 1978, and again for various revivals during the 1990s and 2000s. He is also the lead singer of post-punk band Public Image Ltd (PiL), which he founded and fronted from 1978 until 1993, and again since 2009. Since 2013 Lydon has held British, Irish and American citizenship.

I don't release records to be anything but enjoyable.

I don't listen to music. I hate music.

You'd have to be daft as a brush to say you didn't like Pink Floyd.

I find Lady Gaga hilarious. And I kind of like her. My heart's warmed to her.

For me all governments are my enemies and I've never made any bones about it any other way other than directly, and I don't fly the left flag or the right flag, me, I'm common sense.

You're made to feel ugly, and I made ugly beautiful. Just by sheer persistence. Nobody has the right to say that I am ugly, and I will not be a professional victim, you know. Sorry!

I hate the technological rip-offs that pass for music formats these days, and go back to vinyl to hear a good record because the sound is always so much fuller. I don't even like listening to music in the car.

What do you have to do to get people to take an interest? I'm not going to go out and cause a silly sex scandal just to sell a record!

You can't arrest me, I'm a rockstar.

The country you're born in is where your passport comes from. No, not according to Donald Trump! No, not at all. I resent that kind of extremism of any kind. Left wing, right wing. Anyway at all. Anything that judges other people so harshly and across the board stupidity-wise. I got no time for that.

It's volatile, the marriage. Which one isn't? Nothing better than a good, full-on row. Get it all out. Say rude and nasty things. And then be sorry. Genuinely sorry, afterwards.

The real color of my hair is mouse. I always want to be ginger, which I was when I was born, or blond, because I live in L. A. , and I want to look like I go surfing without any physical effort.

Judge not others unless you're prepared to be judged!

You can always wake up on the wrong side of the bed and boo-hiss everyone suffers. We can all be temperamental.

Music is escapism from the grim realities of life. But then as soon as you escape into the music, from my point of view, I found I had to deal with the very things that I thought I was running away from. I wanted to hit those problems on the head and resolve them. So they didn't remain as issues in my psyche.

I somehow hope - naïve though I may be, utopian, possibly - that my music has some kind of calming effect on the universe, that it's somehow beneficial to people.

I'm very open about my politics. I don't believe in any political party at all, none of them.

Turn the other cheek too often and you get a razor through it.

I've never told anyone this. But I suffer from terrible stage fright. True. You can't tell though, can you? Unbelievable, the panic. I nearly die of fear before I go on stage. Something wicked. I can't eat a thing the day before a gig. It'd make me vomit.

Art should be life. It's an imitation of life. It should have some humanity in it.

Art, Humanity, Imitation, Life, Should Have