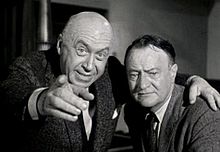 John D. Voelker (June 29, 1903 – March 18, 1991), also known by his pen name Robert Traver, was a noted lawyer, author and fly fisherman from the Upper Peninsula of Michigan. He grew up in his hometown of Ishpeming and later attended the University of Michigan Law School. His early professional career was as an attorney and county prosecutor in Marquette County. Voelker was also appointed to the Michigan Supreme Court by Governor G. Mennen Williams in 1957. He is best known as the author of the novel, Anatomy of a Murder, published in 1958. The best-selling novel was turned into an Academy Award-nominated film of the same name—directed by Otto Preminger and starring James Stewart—that was released July 1, 1959. Duke Ellington wrote the music for the movie. It is critically acclaimed as one of the best trial movies of all time.

To paraphrase a deceased patriot, I regret that I have only one life to give to my fly-fishing.

Most fisherman, including this one, cling to their pet stupidities as they would to a battered briar or an old jacket; and their dogged persistence in wrong methods and general wrong-headedness finally wins the a sort of grudging admiration, if not many fish.

There is a lot of amiable fantasy written about trout fishing, but the truth is that few men know much if anything about the habits of trout and little more about the manner of taking them.

Fly-fishing for wild trout on quiet waters must be one of the toughest and craziest ways to catch fish ever invented by man, as well as among the most frustrating and humiliating.

A writer judging his own work is like deceived husband - he is frequently the last person to appreciate the true state of affairs.

The true fisherman approaches the first day of fishing season with all the sense of wonder and awe of a child approaching Christmas.

The best time to go fishing is when you can get away.

Away, Best Times, Fishing, Get Away, Time

. . . buying a fly rod in the average city store, that is, joining it up and safely waggling it a bit, is much like seeing a woman's arm protruding from a car window: all one can readily be sure of is that the window is open.

I look at trees, hunt mushrooms, and watch animals. Fishing is what gets me out into the woods so I can notice these things.

I listened to a lot of stories when I was a kid. My mother told me stories, and I loved them.

Spinning yarns is a protection against the nuttiness. . . the greed, the hate all around us.

Fishing is such great fun, I have often felt, that it really ought to be done in bed

There is no subsititue for fishing sense, and if a man doesn't have it, verily, he may cast like an angel and still use his creel largely to transport sandwiches and beer

During my addled career as a trout fisherman I have gone on a lot of wild-goose chases, and I ruefully expect to go on a lot more before I hang up my waders

Fly-fishing is a magic way to recapture the rapture of solitude without the pangs of loneliness.

The truth is that trout fishermen scheme and lie and toss in their sleep. They dream of great dripping trout, shapely and elusive as mermaids, and arise cranky and haggard from their fantasies. They are moody and neglectful and all of them a little daft. Moreover they are inclined to drink too much.

Most fishermen swiftly learn that it's a pretty good rule never to show a favorite spot to any fisherman you wouldn't trust with your wife.