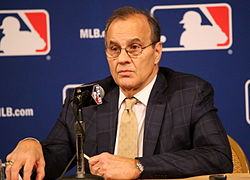 Joseph Paul Torre (/ˈtɔːri/; born July 18, 1940) is an American professional baseball executive, serving in the capacity of Major League Baseball's (MLB) chief baseball officer since 2011. A former player, manager and television color commentator, Torre ranks fifth all-time in MLB history with 2,326 wins as a manager. With 2,342 hits during his playing career, Torre is the only major leaguer to achieve both 2,000 hits and 2,000 wins as a manager. From 1996 to 2007, he was the manager of the New York Yankees and guided the team to four World Series championships.

Years ago, you never concerned yourself with pitch counts. Now, with statistics telling you that between this number and that number bad things happen to this particular pitcher, you have to pay attention to it. The bullpen has become a huge part of what happens now.

I can understand the fact you don't want the ball slipping out of a pitcher's hand because someone can get hurt.

You know, Mike Milken, the money that he has raised for cancer research has been remarkable.

I wish I could paint that picture. As a 20-year-old kid, that was a big thrill.

When you sign on to do a job, you hope you'll be able to get it done. But that's not always in your control.

You have to fix something when it first appears.

I think that I have a sensitivity toward people, and that is a strength.

I met Tiger Woods, and I looked in his eyes - and I saw Derek Jeter. They don't have to tell people they're good. They just prove it by the way they love the competition.

I don't have a great deal of stress job-wise in my life, and that feels good.

It's not easy to just say you don't want to do something any more.

If all of us who love baseball and are doing our jobs, then those who get the game from us will be as proud to be a part of it as we were. And we are. This game is a gift, and I am humbled, very humbled, to accept its greatest honor.

Golf is the only game I know where you call a foul on yourself.

I knew what the Dodgers uniform represented as a kid growing up in Brooklyn.

He [Nomar Garciaparra] could go 0-for-10 in rehab and it wouldn't mean anything.

I was always a little hesitant to accuse people of loading a bat to hit a ball farther. I was always very hesitant to approach people because I never had any evidence that I had firsthand knowledge of.

My father wasn't the best role model to me.

In regards to steroids, I think we're all to blame, all of baseball. I never realized how far-reaching this problem has been.

Boomer is. . . Boomer. That pretty much tells you all you need to know

Don't be afraid to fail, encourage your talent, and use your heart. And never be unprepared

St. Louis has always been special to me.

Louis, Special, Special To Me