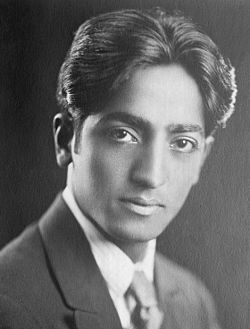 Jiddu Krishnamurti (/ˈdʒɪduː ˌkrɪʃnəˈmɜːrti/;11 May 1895 – 17 February 1986) was a philosopher, speaker and writer. In his early life he was groomed to be the new World Teacher but later rejected this mantle and withdrew from the Theosophy organization behind it. His subject matter included psychological revolution, the nature of mind, meditation, inquiry, human relationships, and bringing about radical change in society. He constantly stressed the need for a revolution in the psyche of every human being and emphasised that such revolution cannot be brought about by any external entity, be it religious, political, or social.

Without discontentment, without revolt, you can never attain harmony. It is a necessary stage, which must be gone through by everyone.

Violence is not merely killing another. It is violence when we use a sharp word, when we make a gesture to brush away a person, when we obey because there is fear. So violence isn't merely organized butchery in the name of God, in the name of society or country. Violence is much more subtle, much deeper, and we are inquiring into the very depths of violence.

As long as the mind is seeking to fill itself, it will always be empty. When the mind is no longer concerned with filling its own emptiness, then only does that emptiness cease to be.

Sir, when two people have the extraordinary quality of this state, words are not necessary. Where that quality of love exists, words become unnecessary. There is instant communication.

The real student is studying, learning, inquiring, exploring, not just until he is twenty or twenty-five, but throughout life.

You cannot ask which system is the better because you cannot standardize one system for the whole of the world. You cannot have one stereotyped code of morality for every country. One system may work very well in one country and very badly in another. You cannot grow a tropical flower in a cold climate.

. . . Choice in every form is conflict. Contradiction is inevitable in choice; this contradiction, inner and outer breeds confusion and misery.

Right education should help the student, not only to develop his capacities, but to understand his own highest interest.

If we try to listen we find it extraordinarily difficult, because we are always projecting our opinions and ideas, our prejudices, our background, our inclinations, our impulses; when they dominate, we hardly listen at all to what is being said. . . One listens and therefore learns, only in a state of silence, in which this whole background is in abeyance, is quite; then, it seems to me, it is possible to communicate

We carry about us the burden of what thousands of people have said and the memories of all our misfortunes. To abandon all that is to be alone, and the mind that is alone is not only innocent but young -- not in time or age, but young, innocent, alive at whatever age -- and only such a mind can see that which is truth and that which is not measurable by words.

A lily or a rose never pretends, and its beauty is that it is what it is.

Beauty, It Is What It Is, Lilies, Lily, Rose

Only in relationship can you know yourself, not in abstraction, and certainly not in isolation.

Analysis does not transform consciousness.

Is there a thinker apart from thought?

You cannot prevent a man getting drunk if he wishes to do so, but when he becomes a nuisance, then you interfere.

The purpose of having the title 'World-Teacher' is to acknowledge, to show, the condition of mind and heart when you have achieved. It is like saying: 'I have painted a picture'. It is like saying: 'I have written a poem'. It is an assertion of the fact of attainment, rather than the narrow understanding that is given to labels and phrases. What the phrase indicates is of importance.

Where there is love, do what you will, it will be right action. It will never bring conflict to one's life. In the flame of love, all fear is consumed.