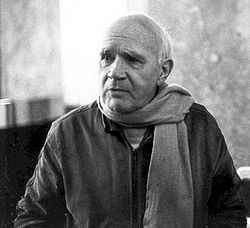 Prison, dungeons, blessed places where evil is impossible because they are the crossroads of all the evil in the world. One cannot commit evil in hell.

on him, under him, with his mouth pressed to hers, he sang to her uncouth songs that moved through her body.

Perhaps all music, even the newest, is not so much something discovered as something that re-emerges from where it lay buried in the memory, inaudible as a melody cut in a disc of flesh. A composer lets me hear a song that has always been shut up silent within me.

Anyone who hasn't experienced the ecstasy of betrayal knows nothing about ecstasy at all.

Anyone who knows a strange fact shares in its singularity.

They remain dead, the people I try to resuscitate by straining to hear what they say. But the illusion is not pointless, or not quite, even if the reader knows all this better than I do. One thing a book tries to do, beneath the disguise of words and causes and clothes and grief, is show the skeleton and the skeleton dust to come. The author too, like those of whom he speaks, is dead.

Limited by the world, which I oppose, jagged by it, I shall be all the more handsome and sparkling as the angles which wound me and give me shape are more acute and the jagging more cruel.

The force of what was called Panther rhetoric or word mongering resided not in elegant discourse but in strength of affirmation (or denial), in anger of tone and timbre. When the anger led to action there was no turgidity or over-emphasis. Anyone who has witnessed political rows among the Whites will have to admit that the Whites aren't overburdened with poetic imagination.

Men endowed with a wild imagination should have, in addition, the great poetic faculty of denying our universe and its values so that they may act upon it with sovereign ease.

A great wind swept over the ghetto, carrying away shame, invisibility and four centuries of humiliation. But when the wind dropped people saw it had been only a little breeze, friendly, almost gentle.

In reviewing my life, in tracing its course, I fill my cell with the pleasure of being what for want of a trifle I failed to be, recapturing, so that I may hurl myself into them as into dark pits, those moments when I strayed through the trap-ridden compartments of a subterranean sky

Slowly but surly I want to strip her of every kind of happiness as to make a saint of her.

When we see life, we call it beautiful. When we see death, we call it ugly. But it is more beautiful still to see oneself living at great speed, right up to the moment of death.

The most reasonable man always manages, when he pulls the trigger, to become a dispenser of justice.

It's a true image, born of a false spectacle.

Creation is not a light-hearted game. The creator commits to a terrible adventure, which is to take up-on himself all of the dangers that his creatures run.

I recognize in thieves, traitors and murderers, in the ruthless and the cunning, a deep beauty - a sunken beauty.

A man must dream a long time in order to act with grandeur, and dreaming is nursed in darkness.

Anyone who's never experienced the pleasure of betrayal doesn't know what pleasure is.

They spent their time doing nothing. . . they let intimacy fuse them.

Doing Nothing, Fuse, Intimacy, Nothing