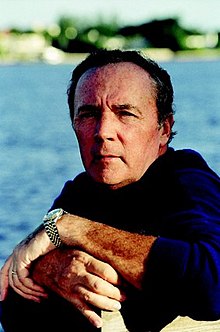 James Brendan Patterson (born March 22, 1947) is an American author and philanthropist. Among his works are the Alex Cross, Michael Bennett, Women's Murder Club, Maximum Ride, Daniel X, NYPD Red, Witch and Wizard, and Private series, as well as many stand-alone thrillers, non-fiction and romance novels. His books have sold more than 300 million copies and he was the first person to sell 1 million e-books. In 2016, Patterson topped Forbes's list of highest-paid authors for the third consecutive year, with an income of $95 million. His total income over a decade is estimated at $700 million.

For me, "Zoo" has always been a fable. It has nothing to do with realism. It's a fable about what man is doing to the world, and the animals have retribution. But in the real world, this would not happen. But in the world of 1984, this kind of thing can happen in a story.

I had to give him props, but how annoying of him to be a hero when I was trying so hard to dislike him. It was downright selfish.

You could have gotten a car with GPS," Total said helpfully. Yes," I said "Or we could have brought along a dog that doesn't talk. " I gave Angel a pointed look, and she smiled, well, angelically, at me. Total huffed, offended at me and climbed into her lap.

Good memories are like charms. . . Each is special. You collect them, one by one, until one day you look back and discover they make a long, colorful bracelet.

Beware the anger of a patient man.

I'm going to introduce BookShots, which are these under-150-page books that I'm launching, and they're under $5. They just launched in Australia. I already had a ton of content, but now add 50 books a year of content.

If you love something let it go. . if it comes back its yours

It's always refreshing to meet someone crazier than us," I said. "We seem so normal afterward.

They call me, The Sharkalator

Half the time when brothers wrestle, it's just an excuse to hug each other.

It's our job - as parents, grandparents, aunts, uncles - to find books our kids are going to like.

When its true, when it's right, love can give you the kind of joy that you can't get from any other experience.

He gives my hand a tight squeeze, but that desperation, that urgency between us is gone. No insecurities. Max and Fang. Fang and Max. No longer a question. We just are.

Fang looked at the newest bird kid. Dylan was an inch or two taller than he was, and somewhat heavier built, though he still had the long, lean look of a human-avian hybrid-you couldn't make bricks fly.

Iggy: "Now what? Who you gonna call?" A quiet voice in the hallway outside: "Ghostbusters!" (Captain Perry and John groan) John: "That phrase is ruined forever.

I looked around. As flock leader, everyone was expecting me to make a decision. Jeb's presence here would bring uncertainty, chaos, probably danger. It would perk up my day.