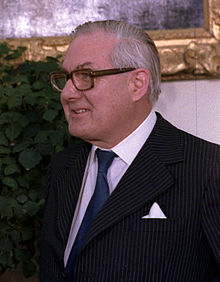 Leonard James Callaghan, Baron Callaghan of Cardiff, KG, PC (/ˈkæləˌhæn/; 27 March 1912 – 26 March 2005), often known as Jim Callaghan, served as Prime Minister of the United Kingdom from 1976 to 1979 and Leader of the Labour Party from 1976 to 1980. Callaghan is, to date, the only British politician to have served in all four of the Great Offices of State, having been Chancellor of the Exchequer (1964–1967), Home Secretary (1967–1970), and Foreign Secretary (1974–1976) prior to his appointment as Prime Minister. As Prime Minister, he had some successes, but is mainly remembered for the "Winter of Discontent" of 1978–79. During a very cold winter, his battle with trade unions led to massive strikes that seriously inconvenienced the public, leading to his defeat in the polls by Conservative leader Margaret Thatcher.

A leader must have the courage to act against an expert's advice.

The surtax payers, having been soaked, have found a way to get out of the rain.

If Britain becomes a member of the Community, it will be healthier for Britain, advantageous for Europe, and a gain for the whole world. I do not know of many economic or political problems in the world which will be easier to solve if Britain is outside rather than inside the Community.

Those who advocate devaluation are calling for a reduction in the wage levels and the real wage standards of every member of the working class.

Unilateral disarmament by Britain is opposed to our country's best interests, could begin the unravelling of NATO and therefore jeopardise the stability of Europe.

I hate putting up taxes.

The Soviet Union's propaganda clearly wishes to use public opinion in this country to get the West to reduce its own arms while doing nothing themselves. In this way they would gain nuclear superiority. This is simply not on.

I am rather in favour of dealing with teenage hooliganism.

Some people, however long their experience or strong their intellect, are temperamentally incapable of reaching firm decisions.

There is not a single injustice in Northern Ireland that is worth the loss of a single British soldier or a single Irish citizen either.

You never reach the promised land. You can march towards it

I have not the slightest doubt that the economic measures and the Socialist measures which one will find in the countries of Eastern Europe, will become increasingly powerful against the unco-ordinated, planless society in which the West is living at present.

Society today is so organised that every individual group has the power to disrupt it. How is their power to be channelled into constructive channels?

If we have to prove our Europeanism by accepting that French is the dominant language in the Community, then my answer is quite clear, and I will say it in French in order to prevent any misunderstanding: Non, merci beaucoup.

I've never been one to say that Britain was joining a happy band of brothers.