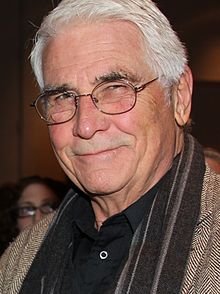 James Brolin (/ˈbroʊlɪn/; born Craig Kenneth Bruderlin, July 18, 1940) is an American actor, producer, and director, best known for his roles in film and television, including sitcoms and soap operas. He is the father of actor Josh Brolin and husband of Barbra Streisand. Brolin has won two Golden Globes and an Emmy. He received a star on the Hollywood Walk of Fame on August 10, 2016.

Any kid that feels like they don't have any kind of future, whether they're on a street corner in Harlem or in a little town in Kansas where nothing happens, it's all out there for them. They can do whatever they dream or wish or see on television, or read about in the papers.

I almost became a music major, but somehow I was so enthralled with the camera and becoming a director that I stuck with film school and theatrics.

I feel like we were married from the moment we sat down there.

The fact is, I am in my third marriage and I do not believe in divorce. But I was half the problem, I guarantee you. More than half the problem. I couldn't negotiate with the other women.

I believe that anybody who gets married should go to a counselor for months before the wedding. I think that's going to save guys a lot of money and the ladies a lot of heartbreak.

I think you can have a whole terrific, smart career as a second and third banana and work more and have much less risk than the lead guy. But I like being the lead guy.

There are portions of Malibu that are very remote; it's like living in the country somewhere.

Country, Like, Living, Living In The Country, Malibu, Remote

One of the things I love about directing is I love actors, because no matter how complex they are, once you get down to working and talking to them and the toughest guy will want you to open them up and he wants to show you stuff he was afraid to show anybody before.

I was raised in a family where no one had a serious bone in their body and every answer was a riddle, a joke, or a prank.

I started out with this dream of being a director and doing cinematography and bought my first film camera at 15.