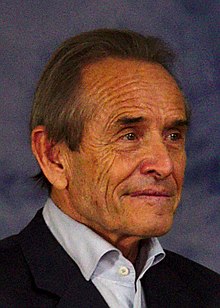 Jacques Bernard "Jacky" Ickx (French pronunciation:  [ʒaki ɪks]) (born 1 January 1945, in Brussels) is a Belgian former racing driver who won the 24 Hours of Le Mans six times, achieved eight wins and 25 podium finishes in Formula One, won the Can-Am Championship in 1979 and is a former winner of the Dakar Rally.

I am infinitely grateful to the life which privileged me.

My father was a motorsports journalist and a motorbike fan. He gave me my motocross bike.

The existence is a tremendous curiosity, with in the course of the years, the discovery of yourself in your inmost evolutions. With the age you feel better than you are, what you represent. Which means a little at the planet's scale.

And luckily, therefore the good old days return. The traditional art of driving counts again, and it is all about good tactics, skills and reflexes instead of simple power.

I believe to have been one of the rare drivers to have returned to Ferrari.

In the past, two colleagues died each season. It was generally accepted this could happen.

The margin between success and drama is fractional.

The fact that I am still alive after 100,000 laps is my championship.

In the end I didn't get a top car any more. I had no toughness left. That was the reality.

I drove long distances like the 24 hours of Le Mans for years. But even this racing is now over. I retired.