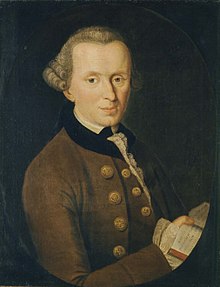 Immanuel Kant (/kænt/; German: [ɪˈmaːnu̯eːl kant]; 22 April 1724 – 12 February 1804) was a German philosopher who is a central figure in modern philosophy. Kant argues that the human mind creates the structure of human experience, that reason is the source of morality, that aesthetics arises from a faculty of disinterested judgment, that space and time are forms of human sensibility, and that the world as it is "in-itself" is independent of humanity's concepts of it. Kant took himself to have effected a "Copernican revolution" in philosophy, akin to Copernicus' reversal of the age-old belief that the sun revolves around the earth. Kant's beliefs continue to have a major influence on contemporary philosophy, especially the fields of metaphysics, epistemology, ethics, political theory, and aesthetics.

So act that anything you do may become universal law.

[R]eason is. . . given to us as a practical faculty, that is, as one that influences the will.

Two things fill the mind with ever new and increasing admiration and awe, the more often and steadily we reflect upon them: the starry heavens above me and the moral law within me. I do not seek or conjecture either of them as if they were veiled obscurities or extravagances beyond the horizon of my vision; I see them before me and connect them immediately with the consciousness of my existence. "

cruelty to animals is contrary to man's duty to himself, because it deadens in him the feeling of sympathy for their sufferings, and thus a natural tendency that is very useful to morality in relation to other human beings is weakened.

The function of the true state is to impose the minimum restrictions and safeguard the maximum liberties of the people, and it never regards the person as a thing.

If man makes himself a worm he must not complain when he is trodden on.

Enlightenment is man's emergence from his self-incurred immaturity.

Human reason has this peculiar fate that in one species of its knowledge it is burdened by questions which, as prescribed by the very nature of reason itself, it is not able to ignore, but which, as transcending all its powers, it is also not able to answer.

Man's greatest concern is to know how he shall properly fill his place in the universe and correctly understand what he must be in order to be a man.

Life is the faculty of spontaneous activity, the awareness that we have powers.

Act so as to use humanity, yourself and others, always as an end and never as a means to an end.

Melancholy characterizes those with a superb sense of the sublime.

Everything in nature acts in conformity with law.

The ideal of the supreme being is nothing but a regulative principle of reason which directs us to look upon all connection in the world as if it originated from an all-sufficient necessary cause.

Look closely. The beautiful may be small.

. . . as soon as we examine suicide from the standpoint of religion we immediately see it in its true light. We have been placed in this world under certain conditions and for specific purposes. But a suicide opposes the purpose of his creator; he arrives in the other world as one who has deserted his post; he must be looked upon as a rebel against God. God is our owner; we are his property; his providence works for our good.

Nothing is divine but what is agreeable to reason.

Do the right thing because it is right.