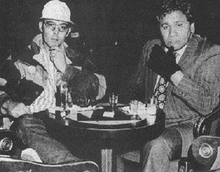 Hunter Stockton Thompson (July 18, 1937 – February 20, 2005) was an American journalist and author, and the founder of the gonzo journalism movement. Born in Louisville, Kentucky, to a middle-class family, Thompson had a turbulent youth after the death of his father left the family in poverty. He was unable to formally finish high school as he was incarcerated for 60 days after abetting a robbery. He subsequently joined the United States Air Force before moving into journalism. He traveled frequently, including stints in California, Puerto Rico, and Brazil, before settling in Aspen, Colorado, in the early 1960s.

To give advice to a man who asks what to do with his life implies something very close to egomania. To presume to point a man to the right and ultimate goal - to point with a trembling finger in the RIGHT direction is something only a fool would take upon himself.

October is the cruelest month of any election year, but by then, the pain is so great that even the strong are like jelly and time has lost all meaning for anybody still involved in a political campaign. By that time, even candidates running unopposed have abandoned all hope of victory and live only for the day when they will finally be free to seek vengeance on all those treacherous bastards who once passed themselves off as loyal friends and allies and swore they were only in it because they all shared the same hopes and dreams.

But our trip was different. It was a classic affirmation of everything right and true and decent in the national character. It was a gross, physical salute to the fantastic possibilities of life in this country-but only for those with true grit. And we were chock full of that.

There is no fool like a careless gambler who starts taking victory for granted.

You can't hoard fun. It has no shelf life.

Most of my friends are into strange things I don't really understand - and with a few shameful exceptions I wish them all well. Who am I, after all, to tell some friend he shouldn't change his name to Oliver High, get rid of his family, and join a Satanism cult in Seattle? Or to argue with another friend who wants to buy a single-shot Remington Fireball so he can go out and shoot cops from a safe distance?

The Edge. . . There is no honest way to explain it because the only people who really know where it is are the ones who have gone over. The others-the living-are those who pushed their control as far as they felt they could handle it, and then pulled back, or slowed down, or did whatever they had to when it came time to choose between Now and Later. But the edge is still Out there.

Sex without love is as hollow and ridiculous as love without sex.

America. . . just a nation of two hundred million used car salesmen with all the money we need to buy guns and no qualms about killing anybody else in the world who tries to make us uncomfortable.

Kill the body and the head will die.

I have always hated bowling, and I don't mind admitting it.

Music has always been a matter of Energy to me, a question of Fuel. Sentimental people call it Inspiration, but what they really mean is Fuel. I have always needed Fuel. I am a serious consumer. On some nights I still believe that a car with the gas needle on empty can run about fifty more miles if you have the right music very loud on the radio.

Jim Harrison is someone I always enjoy, one of the great contemporary writers. I like Tim Ferris' Big Boom Theory. I'm getting into a different kind of reading, not straight novels.

We are all alone, born alone, die alone, and - in spite of True Romance magazines - we shall all someday look back on our lives and see that, in spite of our company, we were alone the whole way.

The brutal reality of politics would be probably intolerable without drugs.

Happy," I muttered, trying to pin the word down. But it is one of those words, like Love, that I have never quite understood. Most people who deal in words don’t have much faith in them and I am no exception – especially the big ones like Happy and Love and Honest and Strong. They are too elusive and far to relative when you compare them to sharp, mean little words like Punk and Cheap and Phony. I feel at home with these, because they’re scrawny and easy to pin, but the big ones are tough and it takes either a priest or a fool to use them with any confidence.

I had a truly horrible dream last night. . . [Arnold Schwarzenegger, Mike Tyson and I] were on our way to a TV studio for a debate about his long-time working friendship with the powerful Bush family from Texas and how it might affect the next Bush presidency when The Terminator seizes power in Sacramento and tries to hand over the state's 54 electoral votes by election day in 2004. That is the basic plan behind Schwarzenegger running. He doesn't want to be Governor, he just wants the electoral votes to go to Bush this time.

The TV business is uglier than most things. It is normally perceived as some kind of cruel and shallow money trench through the heart of the journalism industry, a long plastic hallway where thieves and pimps run free and good men die like dogs, for no good reason.

Sex, drugs, and insanity have always worked for me, but I wouldn't recommend them for everyone.

Allen [ Ginsberg] was a particular friend, one of my heroes, really. I knew him almost as long as I've been writing.