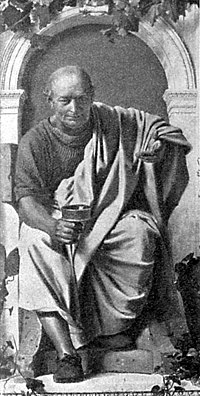 Quintus Horatius Flaccus (December 8, 65 BC – November 27, 8 BC), known in the English-speaking world as Horace (/ˈhɒrəs/ or /ˈhɔːrəs/), was the leading Roman lyric poet during the time of Augustus (also known as Octavian). The rhetorician Quintilian regarded his Odes as just about the only Latin lyrics worth reading: "He can be lofty sometimes, yet he is also full of charm and grace, versatile in his figures, and felicitously daring in his choice of words."[nb 1]

The dispute is still before the judge.

The lofty pine is oftenest shaken by the winds; High towers fall with a heavier crash; And the lightning strikes the highest mountain.

It is said that the propriety even of old Cato often yielded to the exciting influence of the grape.

Be not ashamed to have had wild days, but not to have sown your wild oats.

It is not every man that can afford to go to Corinth.

Of what use is a fortune to me, if I cannot use it? [Lat. , Quo mihi fortunam, si non conceditur uti?]

Choose a subject equal to your abilities; think carefully what your shoulders may refuse, and what they are capable of bearing.

Who then is sane? He who is not a fool.

As a true translator you will take care not to translate word for word.

Even the good Homer is sometimes caught napping.

It makes a great difference whether Davus or a hero speaks.

Even in animals there exists the spirit of their sires.

By heaven you have destroyed me, my friends!

Capture your reader, let him not depart, from dull beginnings that refuse to start

Drive Nature from your door with a pitchfork, and she will return again and again.

Whatever you advise, be as brief as possible.

He who has made it a practice to lie and deceive his father, will be the most daring in deceiving others.

Summer treads on heels of spring.

Gladly accept the gifts of the present hour.

Most virtue lies between two vices.