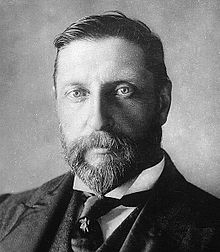 Sir Henry Rider Haggard, KBE, Kt (/ˈhæɡərd/; 22 June 1856 – 14 May 1925), known as H. Rider Haggard, was an English writer of adventure novels set in exotic locations, predominantly Africa, and a pioneer of the Lost World literary genre. He was also involved in agricultural reform throughout the British Empire. His stories, situated at the lighter end of Victorian literature, continue to be popular and influential.

Civilization is only savagery silver-gilt.

Passion is like the lightning, it is beautiful, and it links the earth to heaven, but alas it blinds!

How can a world be good in which Money is the moving power, and Self-interest the guiding star?

It is curious to look back and realize upon what trivial and apparently coincidental circumstances great events frequently turn as easily and naturally as a door on its hinges.

Now, after these things were done, the Pharaoh and his Queen drove through the hosts of Egypt in their golden chariot, and received the homage of the hosts ere they departed northwards for Thebes. At nightfall they returned again and sat side by side at the marriage feast, and once more Tua swept her harp of ivory and gold, and sang the ancient song of him who dared much for love, and won the prize.

We were like confirmed opium-eaters: in our moments of reason we well knew the deadly nature of our pursuit, but we certainly were not prepared to abandon its terrible delights.

Truly time should be measured by events, and not by the lapse of hours.

It is a hard thing when one has shot sixty-five lions or more, as I have in the course of my life, that the sixty-sixth should chew your leg like a quid of tobacco. It breaks the routine of the thing, and putting other considerations aside, I am an orderly man and don't like that. This is by the way.

The Almighty gave us our lives, and I suppose He meant us to defend them, at least I have always acted on that, and I hope it will not be brought up against me when my clock strikes.

I am not a nervous man in a general way, and very little troubled with superstitions, of which I have lived to see the folly.

My death is very near to me, and of this I am glad, for I desire to pursue the quest in other realms, as it has been promised to me that I shall do.

There are things and there are faces which, when felt or seen for the first time, stamp themselves upon the mind like a sun image on a sensitized plate and there remain unalterably fixed.

Everything has an end, if only you live long enough to see it.

We may taste of every turn of chance - now rule as Kings, now serve as Slaves; now love, now hate; now prosper, and now perish. But still, through all, we are the same; for this is the marvel of Identity.

It is a well-known fact that very often, putting the period of boyhood out of the argument, the older we grow the more cynical and hardened we become; indeed, many of us are only saved by timely death from moral petrification, if not from moral corruption.

Truly wealth, which men spend all their lives in acquiring, is a valueless thing at the last.

There is no loneliness like the loneliness of crowds, especially to those who are unaccustomed to them.

Time after time have nations, ay, and rich and strong nations, learned in the arts, been, and passed away to be forgotten, so that no memory of them remains. This is but one of several; for Time eats up the works of man.

Men and women, empires and cities, thrones, principalities, and powers, mountains, rivers, and unfathomed seas, worlds, spaces, and universes, all have their day, and all must go.

So they crucified their Messiah? Well can I believe it. That He was a Son of the Living Spirit would be naught to them, if indeed He was so. . . . They would care little for any God if he came not with pomp and power.

Believe, Living, Messiah, Son, Would Be