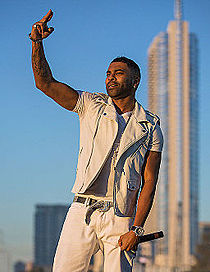 Elgin Baylor Lumpkin (born October 15, 1970), better known by his stage name Ginuwine, is an American singer, songwriter, dancer and actor. Ginuwine began his career as a member of Swing Mob in the early 1990s. Signing to Epic Records as a solo artist in the mid-1990s, Ginuwine has released a number of multi-platinum and platinum-selling albums and singles, becoming one of R&B's top artists during the late 1990s and early 2000s. He had significant commercial success with his first 4 albums: Ginuwine...The Bachelor (2x Platinum), 100% Ginuwine (2x Platinum), The Life (Platinum), and The Senior (Gold).

I never set out now to get a Grammy, or get an American Music Award, but it still is nice to be recognized.

When you get that person out of that dude, that's the real person, you know. And I don't think its dead, but it needs to be more examples, of what a true gentleman and what a true man in every sense of the word is, and that's what I try to be.

So that's where it differs for me now, it's the creativity, versus, the raunchiness from back in the days. So I just try to be more creative nowadays.

I think, as an artist I done conquered every way that you can go, as far as with creativeness, and directions and love, and you pissed off or, your happy.

Is there any more Room for me in those Jeans.

I believe artists are too focused on the younger crowd. Why would you want to focus on them? Let them do what they do. You continue to do what you do.

You could have a kid that is going to get in trouble a little bit, and you can teach them as much as you can, and hopefully they'll go the right way.

A lot of producers always say "what direction are you going in?" and I don't know. I'm just doing music. Right now it's going well. It's a little slow, but it's expected because I haven't been in the studio for a minute.

Everything's a 360 and that's what's so funny about life now, and they're right at that age and I have teenagers now, and I'm like 'Wow I remember when I did that. ' Aint nothing new.

My drive is still cool, it's not like how when I first began. I don't think anyone's drive is the same.

I think doing shows with other R&B artists like myself brings the attention to the crowd. You can't just do those one artist shows anymore. I don't like just me being on the show.

I want to tell everybody that you won't hear me trying to pop bottles in the club and all that kind of stuff. It's just not me and I think as long as you stay within your element and your age bracket, sure you're going a couple of young folks and teens, but that's not who I'm focused on. I'm really not. I love whoever supports, but I'm just not going to try and go back there because times have changed. If you don't move with the times, you'll get left off. I'm trying to change with the times.

The only thing that's new is the internet! But the problems and issues that all the kids go through now, it's nothing different! It's funny how your kid can come home and tell you something and you can tell them almost how it's going to play out. It's crazy, I be like 'Wow, am I that old?' But you've seen it before, and it's the same thing.

If you're talking triple threat of a writer, singer and actress, that would probably be Beyoncé. If Aaliyah were still here, she and Beyoncé would be neck and neck.

If it sounds good to me and I hate my voice, so if I'm willing to listen to my voice over and over again, it's a hit. Guaranteed it'll be a hit.

By the grace of God alone, I was able to still focus, when it was time for me to do my job, and I think I've done it pretty good, and I know I can buckle down even more.