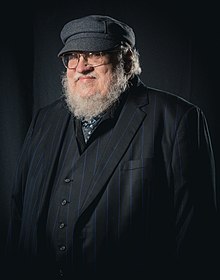 George Raymond Richard Martin (born George Raymond Martin; September 20, 1948) is an American novelist and short-story writer in the fantasy, horror, and science fiction genres, screenwriter, and television producer. He is best known for his series of epic fantasy novels, A Song of Ice and Fire, which was later adapted into the HBO series Game of Thrones (2011–present).

The women are the strong ones, truly.

You look pale, Sansa," Cersei observed. "Is your red flower still blooming?" "Yes" "How apt. The men will bleed out there, and you in here.

As we sin, so do we suffer

Tyrion: My gentle sister seems to have mistaken me for Ned Stark. Bronn: I hear he was taller. Tyrion: Not after Joff took off his head.

I will teach them what it means to put a lion in a cage, Cersei thought.

What is dead may never die, but rises again, stronger and harder.

A craven can be as brave as any man, when there is nothing to fear. And we all do our duty, when there is no cost to it. How easy it seems then, to walk the path of honor. Yet soon or late in every man's life comes a day when it is not easy, a day when he must choose. (Maester Aemon)

Laughter is poison to fear.

The pale pink light of dawn sparkled on branch and leaf and stone. Every blade of grass was carved from emerald, every drip of water turned to diamond. Flowers and mushrooms alike wore coats of glass. Even the mud puddles had a bright brown sheen. Through the shimmering greenery, the black tents of his brothers were encased in a fine glaze of ice. So there is magic beyond the Wall after all.

There are no heroes. . . in life, the monsters win.

A woman's life is nine parts mess to one part magic, you'll learn that soon enough. . . and the parts that look like magic turn out to be the messiest of all.

There are ghosts everywhere," Ser Jorah said softly. "We carry them with us wherever we go.

All dwarfs are bastards in their father's eyes

Drowning was bad enough. But drowning sad and sober, that's too cruel.

A long summer always meant a long winter to come.

And what lesson can we draw from Volantene history? If you want to conquer the world, you best have dragons.

Sometimes the best way to baffle them is to make moves that have no purpose, or even seem to work against you