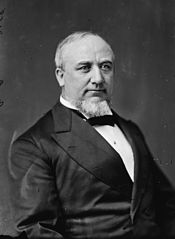 George Quayle Cannon (January 11, 1827 – April 12, 1901) was an early member of the Quorum of the Twelve Apostles of The Church of Jesus Christ of Latter-day Saints (LDS Church), and served in the First Presidency under four successive presidents of the church: Brigham Young, John Taylor, Wilford Woodruff, and Lorenzo Snow. He was the church's chief political strategist, and was dubbed "the Mormon premier" and "the Mormon Richelieu" by the press. He was also a five-time Territorial Delegate to the US Congress.

I am firmly of the opinion that a large number of unmarried men, over the age of 24 years, is a dangerous element in any community.

These birds and animals and fish cannot speak, but they can suffer, and our God who created them, knows their sufferings, and will hold him who causes them to suffer unnecessarily to answer for it. It is a sin against their Creator.

No matter how serious the trial, how deep the distress, how great the affliction, God will never desert us, He never has, and He never will.

You may talk about religion and speak about the Gospel, and say we have got the truth and the plan of salvation, and we have got the authority of the Priesthood; but if we are not honest, it does not amount to anything; for neither God nor honorable men love dishonesty. We must, therefore, be an honest people.

Do angels take the Lord's name in vain? The idea is so ridiculous that we scarcely like to ask the question. . . . How dare we do that which angels dare not do? Is it possible for us to argue that that which is forbidden in heaven is praiseworthy on earth?

Do not, brethren, put your trust in man though he be a bishop, an apostle, or a president. If you do, they will fail you at some time or place; they will do wrong or seem to, and your support be gone.

If I had not obeyed that command of God, concerning plural marriage, I believe that I would have been damned.

If plural marriage be divine, as the Latter-day Saints say it is, no power on earth can suppress it, unless you crush and destroy the entire people.

The greatest events that have been spoken of by all the Holy Prophets will come along so naturally as the consequences of certain causes, that unless our eyes are enlightened by the Spirit of God, and the spirit of revelation rests upon us, we will fail to see that these are the events predicted by the Holy Prophets.

We have got to be watchful, for I tell you God has sent us here to test us and to prove us. We were true in keeping our first estate. The people that are here today stood loyally by God and by Jesus and they did not flinch. If you had flinched, then you would not be here with the Priesthood upon you. The evidence that you were loyal, that you were true, and that you did not waver is to be found in the fact that you have received the Gospel-and the everlasting Priesthood.

If we get our salvation, we shall have to pass by him [Joseph Smith]; if we enter our glory, it will be through the authority he has received. We cannot get around him

Children of polygamists besides being equally as bright and brighter intellectually, are much more healthy and strong.

After the Church of Jesus Christ of Latter-day Saints was organized, there were only two churches upon the earth. They were known respectively as the Church of the Lamb of God and Babylon. The various organizations which are called churches throughout Christendom, though differing in their creeds and organizations, have one common origin. They all belong to Babylon