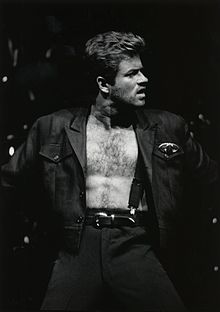 Georgios Kyriacos Panayiotou (25 June 1963 – 25 December 2016), known professionally as George Michael, was an English singer, songwriter, record producer, and philanthropist who rose to fame as a member of the music duo Wham! He was best known for his work in the 1980s and 1990s, including hit singles such as "Wake Me Up Before You Go-Go" and "Last Christmas", and albums such as Faith (1987) and Listen Without Prejudice Vol. 1 (1990).

Be good to yourself 'cause nobody else has the power to make you happy.

I went through a long period where I was afraid of doing things I wanted to do, and you get your courage back, which is what's important.

I am a political person, though not with a big P.

We both [me and Andrew Ridgeley ] knew that splitting up was the right thing to do, and there was no animosity between us at all.

Andrew, Ridgeley, Right, Splitting, Splitting Up, Things To Do

My dad worked in a very typical first-generation immigrant fashion - 24 hours a day for years.

When Andrew [Ridgeley] first met my family, he heard my mom calling me "Yorgos. " He just abbreviated it to Yog, and unfortunately it stuck. I hated it is a teenager. It was not the most glamorous-sounding name in the world.

You can have my credit card, baby, but keep your red hot fingers off of my heart, lady.

I'm the luckiest writer on earth.

I'm not a great collaborator, to tell the truth.

I had to walk away from America, and say goodbye to the biggest part of my career, because I knew otherwise my demons would get the better of me.

I don't have joy in watching myself, whereas, actually, I quite like listening to my own music.

Actually, Joy, Listening, My Own

Bear, Bears, Catholicism, I Can

Celebrity and secrets don't go together. The bastards will get you in the end.

My American gay audience have continued to dance and sing to the music I make in a way that straight Americans haven't. I am grateful to them for that.

I had a very important personal point to make with this song [I Want Your Sex]. I just hated the idea that lust and forbidden excitement could only come with sleaze and strangers.

I think I've gotten everything I want out of the last years, and I still feel like I have a lot of options open to me.