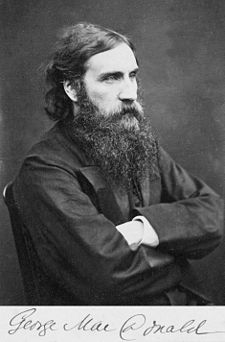 George MacDonald (10 December 1824 – 18 September 1905) was a Scottish author, poet and Christian minister. He was a pioneering figure in the field of fantasy literature and the mentor of fellow writer Lewis Carroll. His writings have been cited as a major literary influence by many notable authors, including W. H. Auden, C. S. Lewis, J. R. R. Tolkien, Walter de la Mare, E. Nesbit and Madeleine L'Engle. C. S. Lewis wrote that he regarded MacDonald as his "master": "Picking up a copy of Phantastes one day at a train-station bookstall, I began to read. A few hours later", said Lewis, "I knew that I had crossed a great frontier." G. K. Chesterton cited The Princess and the Goblin as a book that had "made a difference to my whole existence".

When we understand the outside of things, we think we have them. Yet the Lord puts his things in subdefined, suggestive shapes, yielding no satisfactory meaning to the mere intellect, but unfolding themselves to the conscience and heart.

We are often unable to tell people what they need to know, because they want to know something else, and would therefore only misunderstand what we said.

Good souls many will one day be horrified at the things they now believe of God.

The first thing a kindness deserves is acceptance, the second, transmission.

Where there is no choice, we do well to make no difficulty.

Man's rank is his power to uplift.

The word doctrine, as used in the Bible, means teaching of duty, not theory.

I am perplexed at the stupidity of the ordinary religious being. In the most practical of all matters he will talk and speculate and try to feel, but he will not set himself to do.

God hides nothing. His very work from the beginning is revelation--a casting aside of veil after veil, a showing unto men of truth after truth. On and on from fact Divine He advances, until at length in His Son Jesus He unveils His very face.

No man has the mind of Christ, except him who makes it his business to obey him.

The purposes of God point to one simple end-that we should be as he is, think the same thoughts, mean the same things, possess the same blessedness.

To love righteousness is to make it grow, not to avenge it. Throughout his life on earth, Jesus resisted every impulse to work more rapidly for a lower good.

God is the God of the animals in a far lovelier way, I suspect, than many of us dare to think, but he will not be the God of a man by making a good beast of him.

It is by loving, and not by being loved, that one can come nearest the soul of another; yea, that, where two love, it is the loving of each other, that originates and perfects and assures their blessedness. I knew that love gives to him that loveth, power over over any soul be loved, even if that soul know him not, bringing him inwardly close to that spirit; a power that cannot be but for good; for in proportion as selfishness intrudes, the love ceases, and the power which springs therefrom dies. Yet all love will, one day, meet with its return.

There is this difference between the growth of some human beings and that of others: in the one case it is a continuous dying, in the other a continuous resurrection.

Then the Old Man of the Earth stooped over the floor of the cave, raised a huge stone from it, and left it leaning. It disclosed a great hole that went plumb-down. "That is the way," he said. "But there are no stairs. " "You must throw yourself in. There is no other way.

One chief cause of the amount of unbelief in the world is tha tthose who have seen something of the glory of Christ set themselves to theorize concerning him rather than to obey him.

Only because uplifted in song, was I able to endure the blaze of the dawn.

Until a man has love, it is well he should have fear. So long as there are wild beasts about, it is better to be afraid than secure.