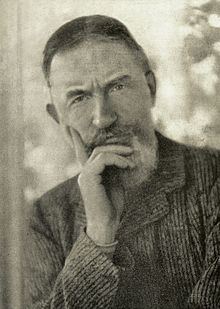 George Bernard Shaw (26 July 1856 – 2 November 1950), known at his insistence simply as Bernard Shaw, was an Irish playwright, critic, polemicist, and political activist. His influence on Western theatre, culture and politics extended from the 1880s to his death and beyond. He wrote more than sixty plays, including major works such as Man and Superman (1902), Pygmalion (1912) and Saint Joan (1923). With a range incorporating both contemporary satire and historical allegory, Shaw became the leading dramatist of his generation, and in 1925 was awarded the Nobel Prize in Literature.

The natural term of the affection of the human animal for its offspring is six years.

It is the end of happiness and the beginning of peace.

The Jews generally give value. They make you pay; but they deliver the goods. In my experience the men who want something for nothing are invariably Christians.

Justice is impartiality. Only strangers are impartial.

No king on earth is as safe in his job as a Trade Union official. There is only one thing that can get him sacked; and that is drink. Not even that, as long as he doesn't actually fall down.

Perhaps the greatest social service that can be rendered by anybody to the country and to mankind is to bring up a family.

Money is indeed the most important thing in the world; and all sound and successful personal and national morality should have this fact for its basis.

Money, Morality, National, Should Have, Successful

I am giving you examples of the fact that this creature man, who in his own selfish affairs is a coward to the backbone, will fight for an idea like a hero. . . . I tell you, gentlemen, if you can shew a man a piece of what he now calls God's work to do, and what he will later call by many new names, you can make him entirely reckless of the consequences to himself personally.

I learned long ago, never to wrestle with a pig. You get dirty, and besides, the pig likes it.

If all the Churches of Europe closed their doors until the drums ceased rolling they would act as a most powerful reminder that though the glory of war is a famous and ancient glory, it is not the final glory of God.

We are members one of another; so that you cannot injure or help your neighbor without injuring or helping yourself.

Affection between adults - if they are really adult in mind and not merely grown up children - and creatures so relatively selfish and cruel as children necessarily are without knowing it or meaning it, cannot be called natural.

What God hath joined together no man shall put asunder: God will take care of that.

Now of all the idealist abominations that make society pestiferous I doubt if there be any so mean as that of forcing self-sacrifice on a woman under the pretense that she likes it.

If you cannot get rid of the family skeleton, you may as well make it dance.

Grain by grain, a loaf. Stone upon stone, a palace.

A man's own self is the last person to believe in him, and is harder to cheat than the rest of the world.

You are all alike, you respectable people. You can't tell me the bursting strain of a ten-inch gun, which is a very simple matter;but you all think you can tell me the bursting strain of a man under temptation. You daren't handle high explosives; but you're all ready to handle honesty and truth and justice and the whole duty of man, and kill one another at that game. What a country! What a world!