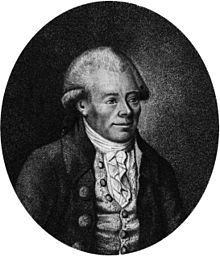 Georg Christoph Lichtenberg (1 July 1742 – 24 February 1799) was a German physicist, satirist, and Anglophile. As a scientist, he was the first to hold a professorship explicitly dedicated to experimental physics in Germany. He is remembered for his posthumously published notebooks, which he himself called Sudelbücher, a description modelled on the English bookkeeping term "scrapbooks", and for his discovery of tree-like electrical discharge patterns now called Lichtenberg figures.

Much reading has brought upon us a learned barbarism

Man loves company - even if it is only that of a small burning candle.

I am always grieved when a man of real talent dies. The world needs such men more than Heaven does.

What makes our poetry so contemptible nowadays is its paucity of ideas. If you want to be read, invent. Who the Devil wouldn't like to read something new?

If all else fails, the character of a man can be recognized by nothing so surely as by a jest which he takes badly.

Honor is infinitely more valuable than positions of honor.

A book which, above all others in the world, should be forbidden, is a catalogue of forbidden books.

He who is enamored of himself will at least have the advantage of being inconvenienced by few rivals.

It is a sure evidence of a good book if it pleases us more and more as we grow older.

To live when you do not want to is dreadful, but it would be even more terrible to be immortal when you did not want to be. As things are, however, the whole ghastly burden is suspended from me by a thread which I can cut in two with a penny-knife.

Pain warns us not to exert our limbs to the point of breaking them. How much knowledge would we not need to recognize this by the exercise of mere reason.

The Greeks possessed a knowledge of human nature we seem hardly able to attain to without passing through the strengthening hibernation of a new barbarism.

Delight at having understood a very abstract and obscure system leads most people to believe in the truth of what it demonstrates.

It often takes more courage to change one's opinion than to stick to it.

People often become scholars for the same reason they become soldiers: simply because they are unfit for any other station. Their right hand has to earn them a livelihood; one might say they lie down like bears in winter and seek sustenance from their paws.

The fruits of philosophy are the important thing, not the philosophy itself. When we ask the time, we don't want to know how watches are made.

To err is human also in so far as animals seldom or never err, or at least only the cleverest of them do so.

There are people who believe everything is sane and sensible that is done with a solemn face.

Affectation is a very good word when someone does not wish to confess to what he would none the less like to believe of himself.