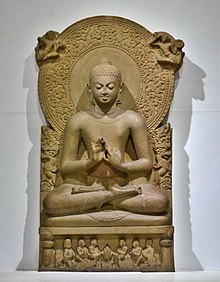 Gautama Buddha[note 3] (c. 563/480 – c. 483/400 BCE), also known as Siddhārtha Gautama,[note 4] Shakyamuni Buddha,[note 5] or simply the Buddha, after the title of Buddha, was an ascetic (śramaṇa) and sage, on whose teachings Buddhism was founded. He is believed to have lived and taught mostly in the eastern part of ancient India sometime between the 6th and 4th centuries BCE.[note 6]

For those who are ready the door to the deathless state is open. If you have ears give up the conditions that bind you and enter in.

Follow not after the vain, understand the ills of sense pleasures. One who is vigilant and meditative, obtains deep joy.

Whatever a monk keeps pursuing with his thinking and pondering, that becomes the inclination of his awareness.

You are far from the end of your journey. The way is not in the sky. The way is in the heart. See how you love.

Unity can only be manifested by the Binary. Unity itself and the idea of Unity are already two.

Your enemy can be your greatest teacher.

It is because I perceive the danger in the practice of mystic wonders, that I loath, abhor, and am ashamed thereof.

When you move your focus from competition to contribution life becomes a celebration. Never try to defeat people, just win their hearts.

He who experiences the unity of life sees his own self in all beings.

Water surrounds the lotus flower, but does not wet its petals.

One act of pure love in saving life is greater than spending the whole of one's time in religious offerings to the gods. . .

For soon the body is discarded, Then what does it feel? A useless log of wood, it lies on the ground, Then what does it know? Your worst enemy cannot harm you As much as your own thoughts, unguarded. But once mastered, No one can help you as much, Not even your father or your mother.

And so, with a boundless heart should one cherish all living beings.

In this world Hate never yet dispelled hate. Only love dispels hate. This is the law, Ancient and inexhaustible.

More than those who hate you, more than all your enemies, an undisciplined mind does greater harm.

Pain in life is inevitable but suffering is not. Pain is what the world does to you, suffering is what you do to yourself [by the way you think about the 'pain' you receive]. Pain is inevitable, suffering is optional. [You can always be grateful that the pain is not worse in quality, quantity, frequency, duration, etc]