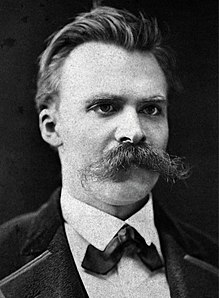 Friedrich Wilhelm Nietzsche (/ˈniːtʃə, -tʃi/; German: [ˈfʁiːdʁɪç ˈvɪlhɛlm ˈniːtʃə] ( listen); 15 October 1844 – 25 August 1900) was a German philosopher, cultural critic, composer, poet, philologist, and a Latin and Greek scholar whose work has exerted a profound influence on Western philosophy and modern intellectual history. He began his career as a classical philologist before turning to philosophy. He became the youngest ever to hold the Chair of Classical Philology at the University of Basel in 1869 at the age of 24. He resigned in 1879 due to health problems that plagued him most of his life, and he completed much of his core writing in the following decade. In 1889, at age 44, he suffered a collapse and afterwards, a complete loss of his mental faculties. He lived his remaining years in the care of his mother until her death in 1897, and then with his sister Elisabeth Förster-Nietzsche. Nietzsche died in 1900.

Discontent is the seed of ethics.

There are the terrible ones who carry about in themselves the beast of prey, and have no choice except lusts or self-laceration. And even their lusts are self-laceration.

Childhood and youth are ends in themselves, not stages.

As is well known, the priests are the most evil enemies—but why? Because they are the most impotent. It is because of their impotence that in them hatred grows to monstrous and uncanny proportions, to the most spiritual and poisonous kind of hatred. The truly great haters in world history have always been priests; likewise the most ingenious haters: other kinds of spirit hardly come into consideration when compared with the spirit of priestly vengefulness.

The destiny of mankind is arranged for happy moments every life has such but not for happy times.

It is I, the ungodly Zarathustra, who says:Who is more ungodly than I, that I may rejoice in his teaching?

And if ye cannot be saints of knowledge, then, I pray you, be at least its warriors. They are the companions and forerunners of such saintship.

It is absolutely impossible for a subject to see or have insight into something while leaving itself out of the picture, so impossible that knowing and being are the most opposite of all spheres.

A person unlearns arrogance when he knows he is always among worthy human beings; being alone fosters presumption. Young people are arrogant because they always associate with their own peers, those who are all really nothing but who would like to be very important.

"God", "immortality of the soul", "redemption", "beyond" - Without exception, concepts to which I have never devoted any attention, or time; not even as a child. Perhaps I have never been childlike enough for them? I do not by any means know atheism as a result; even less as an event: It is a matter of course with me, from instinct. I am too inquisitive, too questionable, too exuberant to stand for any gross answer. God is a gross answer, an indelicacy against us thinkers - at bottom merely a gross prohibition for us: you shall not think!

The value of a man can only be measured with regard to other men.

Measured, Men, Regard, Self Worth, Value

There exists no more repulsive and desolate creature in the world than the man who has evaded his genius and who now looks furtively to left and right, behind him and all about him. . . . He is wholly exterior, without kernel, a tattered, painted bag of clothes.

But are there many honest people who will admit that it is pleasing to give pain?

This woman is beautiful and clever: but how much cleverer she would have become if she were not beautiful!

Even truthfulness is but one means to knowledge, a ladder--but not the ladder.

He who denies his own vanity usually possesses it in so brutal a form that he instinctively shuts his eyes to avoid the necessity of despising himself.

Man demands truth and fulfills this demand in moral intercourse with other men; this is the basis of all social life. One anticipates the unpleasant consequences of reciprocal lying. From this there arises the duty of truth. We permit epic poets to lie because we expect no detrimental consequences in this case. Thus the lie is permitted where it is considered something pleasant. Assuming that it does no harm, the lie is beautiful and charming.

When one is young, one venerates and despises without that art of nuances which constitutes the best gain of life.