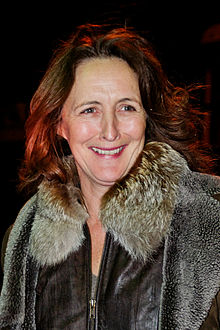 Fiona Shaw, CBE (born Fiona Mary Wilson; 10 July 1958) is an Irish actress and theatre and opera director, known for her role as Petunia Dursley in the Harry Potter films and her role as Marnie Stonebrook in season four of the HBO series True Blood (2011). She has worked extensively with the Royal Shakespeare Company and the National Theatre, twice winning the Olivier Award for Best Actress; for various roles including Electra in 1990, and for Machinal in 1994. She won the 1997 Drama Desk Award for Outstanding Solo Performance for The Waste Land. Her other stage work includes playing the title role in Medea, both in the West End and on Broadway (2001–02). She was awarded an Honorary CBE in 2001.

There once was a demographic survey done to determine if money was connected to happiness and Ireland was the only place where this did not turn out to be true.

I certainly had no intention of playing a man.

There was no professional theater in Cork, but still I did a lot of performing.

I would love to write the story of my upbringing in Ireland.

I'm not afraid of chaos and I'm happy talking to strangers. I really love not knowing where I'm going.

I find it incredibly tedious, hate that it murders itself with its own conservative pomposity.

I can hardly decide what plays I should be in.

Decide, I Can, Play, Plays, Should

People who are good at film have a relationship with the camera.

One moment cannot be the most important.

Every generation is obsessed with the decade before they were born.

I would say the next imminent hot writers are often the writers from the decade before you were born.

Acting doesn't have to be threadbare misery all the time.

I just think that things should be allowed to run their course, and not turned into a Disney ride.

Also, an area that interests me - and it will probably take years to state what I mean - is the period of the rise of democracy, with Tom Paine, which is around the turn of the 18th century into the 19th.

Honestly, I get more recognized for 'Three Men and a Little Lady' than 'Harry Potter'.

Even when they have nothing, the Irish emit a kind of happiness, a joy.

My mother adores singing and plays piano. My uncle was a phenomenal pianist. My brother John is a double bassist. I used to play the piano, badly, and cello. My brother Peter played violin.

The energy released by it is enormous and it becomes quite addictive, the power between the audience and the actor.

The Americans are very clear, and obsessed with nouns.