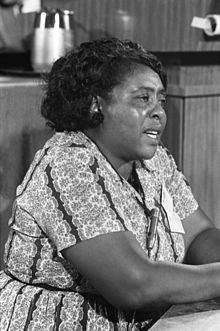 Fannie Lou Hamer (/ˈheɪmər/; née Townsend; October 6, 1917 – March 14, 1977) was an American voting and women's rights activist, community organizer, and a leader in the civil rights movement. She was the co-founder and vice-chair of the Freedom Democratic Party, which she represented at the 1964 Democratic National Convention. Hamer also organized Mississippi's Freedom Summer along with the Student Nonviolent Coordinating Committee (SNCC). She was also a co-founder of the National Women's Political Caucus, an organization created to recruit, train, and support women of all races who wish to seek election to government office.

That's why I believe in Christianity because the Scriptures said: "The things that have been done in the dark will be known on the house tops. "

My parents tried so hard to do what they could to keep us in school, but school didn't last but four months out of the year and most of the time we didn't have clothes to wear.

The methods used to take human lives, such as abortion, the pill, the ring, etc. , amounts to genocide. I believe that legal abortion is legal murder.

I got pictures of us and they would draw big red rings around us and tell what they thought of us. I got a letter said, "I have been shot three times throught the heart. I hope I see your second act. " But this white man who wants to stay white, and to think for the Negro, he is not only destroying the Negro, he is destroying himself, because a house divided against itself cannot stand and that same thing applies to America.

I think there will be great leaders emerging from the State of Mississippi. The people that have the experience to know and the people not interested in letting somebody pat you on the back and tell us "I think it is right. " And it is very important for us not to accept a compromise and after I got back to Mississippi, people there said it was the most important step that had been taken.

In fact, one day I was going to Jackson and I saw a huge sign that U. S. Senator John Stennis was speaking that night for the White Citizens Council in Yazoo City and they also have a State Charter that they may set up for "private schools. " It is no secret.

. . . some of my people could have been left [in Africa] and are living there. And I can't understand them and they don't know me and I don't know them because all we had was taken away from us. And I became kind of angry; I felt the anger of why this had to happen to us. We were so stripped and robbed of our background, we wind up with nothing.

This problem is not only in Mississippi. During the time I was in the Convention in Atlantic City, I didn't get any threats from Mississippi. The threatening letters were from Philadelphia, Chicago and other big cities.

I have just as much right to stay in America - in fact, the black people have contributed more to America than any other race, because our kids have fought here for what was called "democracy"; our mothers and fathers were sold and bought here for a price. So all I can say when they say "go back to Africa," I say "when you send the Chinese back to China, the Italians back to Italy, etc. , and you get on that Mayflower from whence you came, and give the Indians their land back, who really would be here at home?"

You know the Scripture says "be not deceived for God is not mocked; whatsoever a man sow that shall he also reap. " And one day, I don't know how they're going to get it, but they're going to get some of it back. They are scared to death and are more afraid now than we are.

I don't know about the press, but I know in the town where I live everybody was aware that I was in Africa, because I remember after I got back some of the people told me that Mayor Dura of our town said he just wished they would boil me in tar.

Sometimes it seem like to tell the truth today is to run the risk of being killed. But if I fall, I'll fall five feet four inches forward in the fight for freedom. I'm not backing off.

You know I'm not hung up on this liberating myself from the "black" man - I'm not going to try that thing.

No. What would I look like fighting for equality with the white man? I don't want to go down that low. I want the true democracy that'll raise me and that white man up raise America up.

It's time for America to get right.

The President of Guinea, Sekou Toure, came to see us on the 13th. Now you know, I don't know how you can compare this by me being able to see a President of a country when I have just been there two days; and here I have been in America, born in America, and I am 46 years pleading with the President for the last two to three years to just give us a chance-and this President in Guinea recognized us enough to talk to us.

just because people are fat, it doesn't mean they are well fed. The cheapest foods are the fattening ones, not the most nourishing.