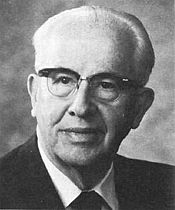 Ezra Taft Benson (August 4, 1899 – May 30, 1994) was an American farmer, government official, and religious leader who served as the 15th United States Secretary of Agriculture during both presidential terms of Dwight D. Eisenhower and as the 13th president of The Church of Jesus Christ of Latter-day Saints (LDS Church) from 1985 until his death in 1994.

Encourage good music and art and literature in your homes. Homes that have a spirit of refinement and beauty will bless the lives of your children forever.

We can and should place special emphasis on developing in our youth constructive incentives - a love of science, engineering, and math, so that they will want to take advanced scientific courses and thereby help meet the needs of our times. Just as a musician has a love of music which drives him to become outstanding in that field, so we must inculcate in some of our qualified young people such an interest in science that they will turn to it of themselves.

No true Latter-day Saint and no true American can be a socialist or a communist.

Grandparents can have a profound influence on their grandchildren. Their time is generally not as encumbered and busy as the parents', so books can be opened and read, stories can be told. . . Children then obtain a perspective of life which not only is rewarding but can bring them security, peace, and strength.

Mothers stay close to your daughters Earn & deserve their love & respect Be united with their father in the rearing of your children Do nothing in your life to cause your daughters to stumble because of your example.

If we would truly seek to be more like our Savior and Master, learning to love as He loves should be our highest goal

The God of heaven sent some of His choicest spirits to lay the foundation of this government. And he has sent other choice spirits to preserve it.

Man is at his best when complimented by the influence of a good woman.

Every Latter-day Saint should love the inspired Constitution of the United States - a nation with a spiritual foundation and a prophetic history - which nation the Lord has declared to be his base of operations in these latter days.

The Book of Mormon offers so much that broadens our understandings of the doctrines of salvation. Without it, much of what is taught in other scriptures would not be nearly so plain and precious.

When obedience ceases to be an irritant and becomes our quest, in that moment God will endow us with power.

Pride is ugly. It says 'If you succeed I am a failure. '

When we put God first, all other things fall into their proper place or drop out of our lives.

For the past two centuries, those who do not prize freedom have chipped away at every major clause of our Constitution until today we face a crisis of great dimensions.

Away, Clause, Constitution, Integrity, Past, Patriotic

Years of happiness can be lost in the foolish gratification of a momentary desire for pleasure.

I say to you with all the fervor of my soul that God intended men to be free. Rebellion against tyranny is a righteous cause. It is an enormous evil for any man to be enslaved to any system contrary to his own will. For that reason men, 200 years ago, pledged their lives, fortunes, and sacred honor. No nation which has kept the commandments of God has ever perished, but I say to you that once freedom is lost, only blood - human blood - will win it back.

Since the beginning, a woman's first and most important role has been ushering into mortality spirit sons and daughters of our Father in Heaven.

Some prideful people are not so concerned as to whether their wages meet their needs as they are that their wages are more than someone else’s. Their reward is being a cut above the rest. This is the enmity of pride.

The more we express our gratitude to God for our blessings, the more he will bring to our mind other blessings. The more we are aware of to be grateful for, the happier we become.

There are certain basic principles regarding the proper role of government. If principles are correct, then they can be applied to any specific proposal with confidence. . . The true statesman values principle above popularity, and works to create popularity for those political principles which are wise and just.