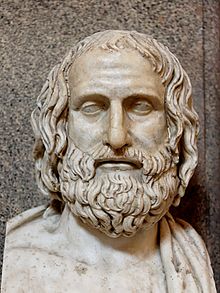 Euripides (/jʊˈrɪpɪdiːz/; Greek: Εὐριπίδης; Ancient Greek: [eu̯.riː.pí.dɛːs]) (c. 480 – c. 406 BC) was a tragedian of classical Athens. Along with Aeschylus and Sophocles, he is one of the three ancient Greek tragedians for whom a significant number of plays have survived. Some ancient scholars attributed 95 plays to him but, according to the Suda, it was 92 at most. Of these, 18 or 19 have survived more or less complete (there has been debate about his authorship of Rhesus, largely on stylistic grounds) and there are also fragments, some substantial, of most of the other plays. More of his plays have survived intact than those of Aeschylus and Sophocles together, partly because his popularity grew as theirs declined—he became, in the Hellenistic Age, a cornerstone of ancient literary education, along with Homer, Demosthenes, and Menander.

The lucky person passes for a genius.

Men honor property above all else; it has the greatest power in human life.

Remember this! No amount of Bacchic reveling can corrupt an honest woman.

The first requisite to happiness is that a man be born in a famous city.

Pay special attention to their agony so I might take some pleasure.

Courage may be taught as a child us taught to speak.

Cleverness is not wisdom. And not to think mortal thoughts is to see few days.

For with slight efforts how should we obtain great results? It is foolish even to desire it.

There is desire in those who love to hear about their loved ones' pains.

There is just one life for each of us: our own.

If some appalling disaster befalls, there's Always a way for the rich.

The power that keeps cities of men together Is noble preservation of law.

Life is a short affair; We should try to make it smooth, and free from strife.

Oh, what a power is motherhood, possessing a potent spell. Love, Light, Blessings

It's not beauty but fine qualities, my girl, that keep a husband.

The man who glories in his luck may be overthrown by destiny.