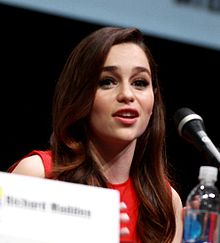 Emilia Isabelle Euphemia Rose Clarke (born 23 October 1986) is an English actress. Born in London and raised in Berkshire, Clarke studied at the Drama Centre London and appeared in a number of stage productions. Her television debut came with a guest appearance in an episode of the British soap opera Doctors. In 2010, she was named as one of the UK Stars of Tomorrow by Screen International magazine for her role in Syfy's film Triassic Attack (2010).

Personally, I'd like as many children as I can pop out, I reckon. You come from a happy family; you want to create a happy family. And in the same breath, I'd like to be on stage at England's National Theatre, doing Miller and Chekhov. Give me a Sam Mendes
Tennessee Williams combination-that would be glorious. And to be making some Oscar-worthy movies with Scorsese. I'm always looking for the hard road. That way, you remain interested and interesting. Hopefully.

I cannot contain this. Please, can we all have something sexual together? You're both beautiful, even just a hug. '

I spent most of my life watching HBO series wishing that at some point in my career I might be able to work with them.

Never trust anyone whose TV is bigger than their book shelf

My rule is never to look at anything on the Internet.

I came out of my mum's stomach going, 'I want to be an actor!'

My father always says, ‘Never trust anyone who has a TV bigger than their bookshelf. ’ So I make sure I read. Back at home, I just put up a massive bookcase and asked everyone I know and love to help me fill it with their favorite books. It’s been quite nice because I’ve learned a lot about my friends and family from what they’ve been giving me. A book says a lot about a person.

A young Brit girl with no theatre experience decided to take on an iconic American role on Broadway. Maybe I should have thought that through?

Decided, Girl, Should Have, Theatre, Thought

I long for the countryside. That's where I get my calm and tranquillity - from being able to come and find a spot of green.

All of the press and stuff - that's the scary stuff. The acting is what I got trained to do.

My life is unrecognisable compared to what it was - 'Game of Thrones' has opened doors that were never there before. But it can be dangerous to see it in those terms, I think. It's best to take it as it comes and work as hard as you can, and hopefully the other things fall into place.

Sometimes I feel like the kid left out - the weirdo with the silver hair that no one likes to talk to.

My mother taught me how to apply my own makeup at 13 years old, and the most important lesson I learned is to never touch my eyebrows and to cleanse, tone, and moisturize twice a day.

Don’t do drugs, don’t have sex, and don’t touch your eyebrows.

Music is something that's always been a huge part of my life.

The calibre of TV's changing. It's becoming much more epic. To rival film, definitely.

I looked around one stage school when I was maybe nine. It just scared the bejesus out of me. I was incredibly open, and the girls seemed fierce and determined.

Drama school is fundamentally practical. I didn't write any essays, so I came out with a BA honors degree in acting.

My dad took me for an audition once, to show me, OK, you want to be a child actor, this is what its like. I sang a folk song about donkeys on this West End stage with this big director, and there was a queue of 200 girls all singing Memory. I was terrible. Terrible.