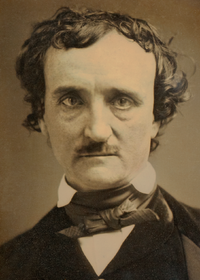 Edgar Allan Poe (/poʊ/; born Edgar Poe; January 19, 1809 – October 7, 1849) was an American writer, editor, and literary critic. Poe is best known for his poetry and short stories, particularly his tales of mystery and the macabre. He is widely regarded as a central figure of Romanticism in the United States and American literature as a whole, and he was one of the country's earliest practitioners of the short story. Poe is generally considered the inventor of the detective fiction genre and is further credited with contributing to the emerging genre of science fiction. He was the first well-known American writer to try to earn a living through writing alone, resulting in a financially difficult life and career.

Once upon a midnight dreary, while I pondered weak and weary.

This maiden she lived with no other thought Than to love and be loved by me.

Men have called me mad; but the question is not yet settled, whether madness is or is not the loftiest intelligence– whether much that is glorious– whether all that is profound– does not spring from disease of thought– from moods of mind exalted at the expense of the general intellect.

Alas! for that accursed time They bore thee o'er the billow, From love to titled age and crime, And an unholy pillow! From me, and from our misty clime, Where weeps the silver willow!

It is impossible to say how first the idea entered my brain, but, once conceived, it haunted me day and night.

And so faintly you came tapping, tapping at my chamber door, That I scarce was sure I heard you"— here I opened wide the door; — Darkness there, and nothing more.

And all my days are trances, And all my nightly dreams Are where thy dark eye glances, And where thy footstep gleams-- In what ethereal dances, By what eternal streams!

It was many and many a year ago, In a kingdom by the sea, That a maiden there lived whom you may know By the name of Annabel Lee;-- And this maiden she lived with no other thought Than to love and be loved by me.

If I venture to displace. . . the microscopical speck of dust. . . on the point of my finger,. . . I have done a deed which shakes the Moon in her path, which causes the Sun to be no longer the Sun, and which alters forever the destiny of multitudinous myriads of stars.

Years of love have been forgot, In the hatred of a minute.

[The daguerreotype] itself must undoubtedly be regarded as the most important, and perhaps the most extraordinary triumph of modern science.

Gaily bedight, A gallant knight, In sunshine and in shadow, Had journeyed long, Singing a song, In search of Eldorado. But he grew old— This knight so bold— And o’er his heart a shadow— Fell as he found No spot of ground That looked like Eldorado. And, as his strength Failed him at length, He met a pilgrim shadow— ‘Shadow,’ said he, ‘Where can it be— This land of Eldorado?’ ‘Over the Mountains Of the Moon, Down the Valley of the Shadow, Ride, boldly ride,’ The shade replied,— ‘If you seek for Eldorado!

I would define, in brief, the Poetry of words as the Rhythmical Creation of Beauty. Its sole arbiter is taste. With the intellect or with the conscience, it has only collateral relations. Unless incidentally, it has no concern whatever either with duty or with truth.

Over the Mountains Of the Moon, Down the Valley of the Shadow, Ride, boldly ride," The shade replied,- "If you seek for Eldorado.

In the marginalia. . . we talk only to ourselves; we therefore talk freshly - boldly - originally - with abandonment - without conceit.

That pleasure which is at once the most pure, the most elevating and the most intense, is derived, I maintain, from the contemplation of the beautiful.