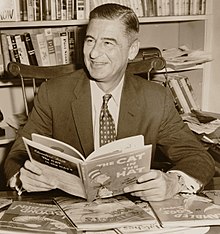 Theodor Seuss Geisel (/ˈsuːs ˈɡaɪzəl/ ( listen); March 2, 1904 – September 24, 1991) was an American author, political cartoonist, poet, animator, book publisher, and artist, best known for authoring more than 60 children's books under the pen name Doctor Seuss (abbreviated Dr. Seuss) (/suːs/). His work includes several of the most popular children's books of all time, selling over 600 million copies and being translated into more than 20 languages by the time of his death.

Catch! calls the Once-ler. He lets something fall. It's a Truffula Seed. It's the last one of all! You're in charge of the last of the Truffula Seeds. And Truffula Trees are what everyone needs. Plant a new Truffula. Treat it with care. Give it clean water. And feed it fresh air. Grow a forest. Protect it from axes that hack. Then the Lorax and all of his friends may come back.

Children's reading and children's thinking are the rock-bottom base upon which this country will rise. Or not rise. In these days of tension and confusion, writers are beginning to realize that books for children have a greater potential for good or evil than any other form of literature on earth.

Just tell yourself, Duckie, you're real quite lucky.

When at last we are sure, You've been properly pilled, Then a few paper forms, Must be properly filled. So that you and your heirs, May be properly billed.

Just never forget to be dexterous and deft. And never mix up your right foot with your left. And will you succeed? Yes! You will, indeed! (98 and 3
4 percent guaranteed. )

Shorth is better than length.

This book is to be read in bed.

If I were invited to a dinner party with my characters, I wouldn't show up.

I tend to basically exaggerate in life, and in writing, it's fine to exaggerate. I really enjoy overstating for the purpose of getting a laugh. For another thing, writing is easier than digging ditches. Well, actually, that's an exaggeration. It isn't.

Writing for children is murder. A chapter has to be boiled down to a paragraph. Every word has to count.

Don't live to please everyone. Embrace those who enjoy your company and to hell with the haters.

When you're in a Slump, you're not in for much fun. Un-slumping yourself is not easily done.

Day Play We play all day. Night Fight We fight all night.

And will you succeed? Yes, you will indeed!

All those Nupboards in the Cupboards they're good fun to have about. But that Nooth gush on my tooth brush. . . . . Him I could do without.

The problem with writing a book in verse is, to be successful, it has to sound like you knocked it off on a rainy Friday afternoon. It has to sound easy. When you can do it, it helps tremendously because it's a thing that forces kids to read on. You have this unconsummated feeling if you stop.

It's high time you were shown That you really don't know all there is to be known.

The Lorax: Which way does a tree fall? The Once-ler: Uh, down? The Lorax: A tree falls the way it leans. Be careful which way you lean.

Oh the places you'll go! There is fun to be done! There are points to be scored. There are games to be won. And the magical things you can do with that ball will make you the winning-est winner of all.