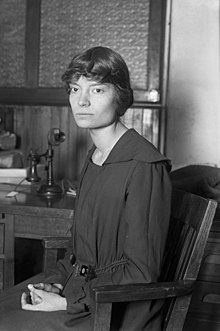 Dorothy Day, Obl.S.B. (November 8, 1897 – November 29, 1980) was an American journalist, social activist, and Catholic convert. Day initially lived a bohemian lifestyle before gaining fame as a social activist after her conversion. She later became a key figure in the Catholic Worker Movement and earned a national reputation as a political radical, perhaps the most famous radical in American Catholic Church history.

When people are standing up for our present rotten system, they are being worse than Communists, it seems to me.

Some have more capacity. Some proceed a few steps along the way. But Christ seemed to love all men. He desired all to be saved.

As a child, I came across the Bible, but nobody in my family had anything to do with religion. I just felt a profound truth there that appealed to me.

It is people who are important, not the masses.

They cannot see that we must lay one brick at a time, take one step at a time.

I believe that we must reach our brother, never toning down our fundamental oppositions, but meeting him when he asks to be met, with a reason for the faith that is in us, as well as with a loving sympathy for them as brothers.

You can spend your time agonizing or organizing.

I think anarchy is natural to the Catholic. The Church is pretty anarchistic, you know. Who pays attention to the Pope or the Cardinals?

Man is not meant to live alone.

No one has a right to sit down and feel hopeless. There is too much work to do.

Down, Down And, Peace, Sit, Wisdom, Work

The Sexual Revolution is a complete rebellion against authority, natural and supernatural, even against the body and its needs, its natural functions of child bearing. This is not reverence for life, it is a great denial and more resembles Nihilism than the revolution that they think they are furthering.

The legal battle against segregation is won, but the community battle goes on.

Against, Battle, Community, Goes On, Legal

Castro wasn't a Marxist. He was a Catholic educated by the Christian Brothers and the Jesuits. But fundamentally, I'm not talking about practising Catholics, but rather about something which is inbred; that is, a part of your country, your heritage, your life.

No matter how corrupt the Church may become, it carries within it the seeds of its own regeneration.

The greatest challenge of the day is: how to bring about a revolution of the heart, a revolution which has to start with each one of us?

The only answer in this life, to the loneliness we are all bound to feel, is community.

We must always aim for the impossible; if we lower our goal, we also diminish our effort.

When you love people, you see all the good in them, all the Christ in them.

When it comes down to it, even on the natural plane, it is much happier and more enlivening to love than to be loved.

We must recognize the fact that many Nazis, Marxists and Fascists believe passionately in their fundamental rightness, and allow nothing to hinder them from their goal in the pursuit of their mission.