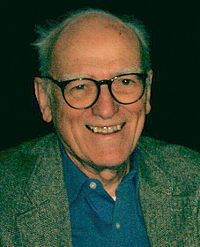 Donald Edwin Westlake (July 12, 1933 – December 31, 2008) was an American writer, with over a hundred novels and non-fiction books to his credit. He specialized in crime fiction, especially comic capers, with an occasional foray into science fiction and other genres. Westlake is perhaps best-remembered for creating two professional criminal characters who each starred in a long-running series: the relentless, hard-boiled Parker (published under the pen name Richard Stark), and John Dortmunder who featured in a more humorous series.

Those 4 guys in the late 60's who attacked a jewel merchant on New York's West 46th St. on the sidewalk, so they could steal his jewel-filled station wagon, which they abandoned 2 blocks later because none of them could drive a stick shift. Where would I be without such people?

I don't think I ever have trouble with writer's block. It's different when you make it up as you go - that means you're going to get stuck. I wouldn't call it writer's block, I'd say, "I don't know where the hell this story is going. "

As we struggle with shopping lists and invitations, compounded by December's bad weather, it is good to be reminded that there are people in our lives who are worth this aggravation, and people to whom we are worth the same.

Nobody gets everything in this life. You decide your priorities and you make your choices. I'd decided long ago that any cake I had would be eaten.

If it weren't for received ideas, the publishing industry wouldn't have any ideas at all.

In the first batch of readers, back in the '60s and '70s, the criminal class was still literate, so I would get letters from people in prison; they thought that I was somebody whom they could shop-talk with, and they would tell me very funny stories. I got a lot of those. Guys who were going to wind up doing 10 to 15 for bank robbery, yes, were reading my books.

A friend of mine, now retired, was then a major exec at a major bank, and one of her jobs, the last four years, was the farewell interview.

Sorry; I have no space left for advice. Just do it.

In order to hold your faith intact be sure it's kept unsullied by fact.

I've had stuff of mine adapted by other people, so I've come to the conclusion that a movie is a different form from a novel and there is no such thing as a true adaptation. You have to adapt to this other thing and do it right. But that voice of the original should somehow still be there, and the original intent should still be there. So if the original writer saw the movie, the writer would say, "Well, that's not what I wrote, but that's what I meant. " And if you can do that, I think you've done your job as a screenwriter.

All of the changes in publishing since 1960 are significant. There are far fewer publishers.

A grifter's got an irresistible urge to be the guy who's wise. There's nothin' to whipping a fool. Hell, fools are made to be whipped. But to take another pro. Even your partner, who knows you and has his eye on you. That's a score! No matter what happens.

I don't think I would have been a good architect. Really, I have thought about this from time to time, and I might have wound up like my father, who never did find that which he could devote his life to. He sort of drifted from job to job. He was a traveling salesman, he was a bookkeeper, he was an office manager, he was here, there, there. And however enthusiastic he was at the beginning, his job would bore him. If I hadn't had the writing, I think I might have replicated what he was doing, which would not have been good.

The many magazines, ranging from pulp to slick, that used to serve as both farm teams for writers and lures to readers, with hundreds of short stories every month, don't exist. Most of the doors for new people have been sealed.

Whenever things sound easy, it turns out there's one part you didn't hear.

I know people who have suffered writer's block, and I don't think I've ever had it. A friend of mine, for three years he couldn't write. And he said that he thought of stories and he knew the stories, could see the stories completely, but he could never find the door. Somehow that first sentence was never there. And without the door, he couldn't do the story. I've never experienced that. But it's a chilling thought.

I was writing everything. I grew up in Albany, New York, and I was never any farther west than Syracuse, and I wrote Westerns. I wrote tiny little slices of life, sent them off to The Sewanee Review, and they always sent them back. For the first 10 years I was published, I'd say, "I'm a writer disguised as a mystery writer. " But then I look back, and well, maybe I'm a mystery writer. You tend to go where you're liked, so when the mysteries were being published, I did more of them.

I'm one of the narrative-push people. I don't outline, I don't plan ahead. So I'm my first reader, telling myself the story as I'm going along. Since I haven't designed it ahead of time, each day I have to be sure that the footing is solid before I make the next step. I think you could be more intricate if you work it out ahead of time.