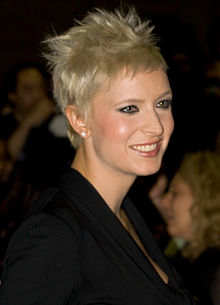 I myself identify as a recovering Blockhead. You'd be surprised how many twenty- and thirty-something hipster chicks have the NKOTB skeleton in their closet, albeit artfully concealed by stacks of Ksubi skinny jeans and ironic Judas Priest T-shirts.

I'm not an especially highbrow person, but I have always loved small, quirky, edgy movies.

I wrote a screenplay for a 'Sweet Valley High' adaptation, and it's really amazing to me how many women who are my age have responded to the idea and are excited about the movie.

I know most people don't like to be around teenagers but I do. I'm one of the only people I can think of who can't wait for my kid to be a teenager. I think being a teenager is one of the most wonderful things in the world. I really enjoyed it - just this heightened emotional state where everything is beautiful and everything is new and you're convinced that you're really going to break the mould and be different from your parents. And the best part is that you have so much more time that you didn't have as a child.

I'm glad that as a 33-year-old working mother, I can still choose to wear a Hello Kitty T-shirt or stay up late scrolling through the Twitter feed of my junior-high crush.

Unfortunately I don't live by a Target now, so I just go to a regular Starbucks as opposed to a Starbucks nested inside a Target, which is my ideal situation. That works out for me. I like that white noise, those interruptions, and the people around me.

I do not quote my own movies. I think I would be pretty insufferable if I did.

'Sweet Valley High' is fantastic, fabulous, a little bit campy, and - dare I say it - cinematic.

I've been an avid consumer of young adult literature since I was one, and I think some people leave that stuff behind when they become old adults, but I never did. I was always interested in the fantasy world created in those novels.

Tabloid photos capture people at their most self-conscious and disoriented; in real life, Paris Hilton is like an elegant paper crane.

He is the cheese to my macaroni.

A few months ago, I had the pleasure of actually visiting the Playboy Mansion. I saw the peacocks, fed grapes to the monkeys, and even braved the fabled Grotto. After seeing the estate, I understood why anyone would be reluctant to leave.

You hear the term "staying grounded" a lot when you're coming up in the movie industry and it's the one word I don't really understand because it implies being tethered almost and I don't like that. Why stay grounded? You might as well become a complete eccentric, float off into the sky and burn yourself on the sun and go crazy.

Even though I am in this weird position of being a semi-recognizable screenwriter, which isn't that common, at the same time, I'm not an actress. I'm pretty isolated.

I have a huge repertoire. I love karaoke.

For me, writing essays, prose and fiction is a great way to be self-indulgent.

I just want to be able to keep my house and pay for my son's school tuition in Los Angeles.