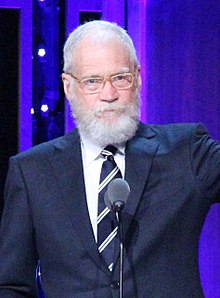 David Michael Letterman (born April 12, 1947) is an American television host, comedian, writer, and producer. He hosted a late night television talk show for 33 years, beginning with the February 1, 1982, debut of Late Night with David Letterman on NBC, and ending with the May 20, 2015, broadcast of Late Show with David Letterman on CBS. In total, Letterman hosted 6,028 episodes of Late Night and Late Show, surpassing friend and mentor Johnny Carson as the longest-serving late night talk show host in American television history. In 1996 Letterman was ranked 45th on TV Guide's 50 Greatest TV Stars of All Time. In 2002, The Late Show with David Letterman was ranked seventh on TV Guide's 50 Greatest TV Shows of All Time.

The new CIA torture report is 6 million pages long. It's almost as long as a George Clooney pre-nup.

Sarah Palin made her debut as a Fox News analyst. They finally found a job that she's not under-qualified for.

There was an interesting development in the CBS-Westmoreland trial: both sides agreed that after the trial, Andy Rooney would be allowed to talk to the jury for three minutes about little things that annoyed him during the trial.

I vote Democrat because I'm way too irresponsible to own a gun, and I know that my local police are all I need to protect me from murderers and thieves. I am also thankful that we have a 911 service that gets police to your home in order to identify your body after a home invasion.

We inadvertently bombed the Chinese Embassy. But Clinton now is working very hard. He has sent a letter of apology to the Chinese. And, he's also given them a gift certificate for future nuclear secrets.

In Hollywood, Oscar is king

Here's why Sarah Palin says she won't be running for president. She says she can be more effective at getting others elected by not running. And I thought, well, that's true, because in 2008 she got Obama elected.

The European countries are really hoping to do well in the Olympics. If they win gold medals, they can use them as cash.

Donald Trump had a university. Well, the state attorney general decided that the Donald Trump University was an unlicensed sham. And I thought, you know you're at a bad university when your commencement speaker is Whitey Bulger.

The new 'Mad Max' movie takes place in a post-apocalyptic world. I have a small part in 'Mad Max. ' I play the old geezer who remembers what steak tasted like.

But I was thinking about this, the Obamas want to adopt a stray dog from the pound. And I think that is admirable. I believe the last president to bring a stray dog into the White House got impeached.

We thought New York City was home to 8 million rats. Turns out, that's a little high. The actual number is 2 million rats. That explains the light turnout for the midterm elections.

St. Patrick's Day is the fourth biggest drinking day in America. It's not the biggest. It's right behind New Year's Eve, Fourth of July, or any Secret Service party.

You can email me, but I prefer letters that come through conventional mail. I like letters that have been licked by strangers.

Today coming to work, I saw one of those only in New York scenes. It was a rat who had passed out after choking on a pretzel.

The Macy's Thanksgiving Day Parade has new balloons this year including the Pillsbury Doughboy balloon and the first openly gay balloon. Also the Thomas Tank Engine balloon, and they even have the Ebola nurse balloon.

Keep in mind that your individual vote doesn't mean anything.

Did you get the new iPhone yet? The iPhone that I have is outdated. It has two pieces and a hand crank.

You can now buy a pack of beer containing 99 cans. A 99-can pack of beer. Who says America has lost its competitive edge?

I don't know what they are protesting at Occupy Wall Street but I'm on their side. But 10,000 protestors and one Porta Potty?