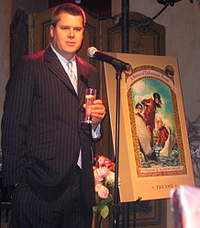 Daniel Handler (born February 28, 1970) is an American writer and musician. He is best known for his children's series A Series of Unfortunate Events and All the Wrong Questions, published under the pseudonym Lemony Snicket. The former was adapted into a Nickelodeon film in 2004, and a Netflix series from 2017 onwards.

It is not very polite to interrupt a person, of course, but sometimes if the person is very unpleasant you can hardly stop yourself.

If you enjoy books with happy endings than you are better off reading some other book.

This knowledge sits in my heart, heavy as a paperweight.

Can't we sleep ten minutes more? I was having a lovely dream about sneezing without covering my mouth, and giving everybody germs.

Covering, Dream, Everybody, Giving, Having, Sleep

Sometimes even in most unfortunate of lives there will occur a moment or two of good.

I’d ruin any day, all my days, for those long nights with you, and I did.

Death is something you cannot escape, such as death, or a cheesecake that has curdled, both of which always turn up sooner later.

How wrong to think I was anyone else, like thinking grass stains make you a beautiful view, like getting kissed makes you kissable, like feeling warm makes you coffee, like liking movies makes you a director. How utterly incorrect to think it any other way, a box of crap is treasures, a boy smiling means it, a gentle moment is a life improved.

One of the most difficult things to think about in life is one’s regrets. Something will happen to you, and you will do the wrong thing, and for years afterward you will wish you had done something different.

I kind of always think my work is unfilmable, and when I meet people who are interested in filming it, I'm always stunned.

Nobody wants to hear that you will try your best. It is the wrong thing to say. It is like saying 'I probably won't hit you with a shovel. ' Suddenly everyone is afraid you will do the opposite.

The miracle is the adverbs, the way things are done.

Just about everything in this world is easier said than done, with the exception of "systematically assisting Sisyphus's stealthy, cyst-susceptible sister," which is easier done than said.

who would dare think that, forever? Some idiot girl who wouldn’t know how things played out.

Those unable to catalog the past are doomed to repeat it.

Bad circumstances have a way of ruining things that would otherwise be pleasant.

I can't imagine why you would want to take your child to see what the career of a writer is like, because it mostly consists of sitting in a room typing, or going to the library and looking something up. Those are not exciting things to watch.

Is it OK not to be a virgin, yes. Most people aren’t virgins, Min. That’s why there’s people to begin with.

. . . there's nothing wrong with occasionally staring out the window and thinking nonsense, as long as the nonsense is yours.

Just because you don't understand it doesn't mean it isn't so.