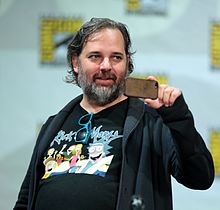 I wish that television would stop selling our hatred of ourselves, and start seducing us with our love of ourselves.

You'll be perfect when you're dead

The most rewarding part of writing for TV is - a year ago I would have said it's just watching it on TV, it's just having been done with it and then collecting all that energy.

Garry Shandling has always been a pioneer of… meta entertainment. He's always been a defender of the creative right to use the frame as part of the painting.

I guess working in the legitimate industry, the best thing you can take away from it is acceptance of the incompetence that often surrounds you. No, that sounds horrible. The most important thing, I guess, is the fact that working in the legitimate industry, what I see all too often is people trying to interpret the wishes of the audience, which with today's technology, is all too easy to measure empirically.

I expect the audience to assume TV is stupid. I accept that it's my job to overcome it.

Don't be so hard on yourself, don't put pressure on yourself, life is just a chain of experiments and results, and you'll be perfect when you're dead.

If somebody's cat happens to turn on the TV, my numbers can double. It's almost unrelated to what's really happening.

Yoda is interesting because, in addition to being wise, he is two feet tall, and a Yoda.

I was raised on NBC television.

With an animated show you can make a banana purple. You can put three hats on a cowboy. That would require several days of stitching, in live-action, that you wouldn't be able to afford. I mean, you can just do tons and tons and tons.

I always try to use my medium, and if I get into a normal sitcom-writing contest with normal sitcom writers, I'm going to lose.

You have to just look at it like Titanic: I know the ship sinks, but this is a love story

'I want to touch people but if I touch them in real life they'll slap me. ' That's what writing isit's a gross person getting a hug.

I love '30 Rock. ' It's one of my favorite shows. It's certainly the gold standard of comedy writing.

All [tv] shows are like cigarettes. You watch two, you have a higher chance of watching three. They're all addictive.

I say what's in my head, and I'm on honest ground. That is worth so much, and I think it does make my job, as a writer, easier. It makes it possible for me to give people stuff that they like.