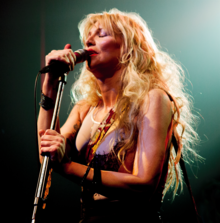 Courtney Michelle Love (née Harrison; born July 9, 1964) is an American singer, songwriter, actress, and visual artist. A notable presence in the punk and grunge scenes of the 1990s, Love has enjoyed a career that spans four decades. She rose to prominence as the lead vocalist of the alternative rock band Hole, which she formed in 1989. Love has drawn public attention for her uninhibited live performances and confrontational lyrics, as well as her highly publicized personal life following her marriage to Kurt Cobain.

But I always wound up being the damn John, when I wanted to be the Paul.

I wish people would just like me for what I am, the singer in an OK new wave band.

There's even one for your titties. I haven't done the boobs mask one yet-you just stick it on your tits, apparently. I have to try it. But I did the foot one and the hand one yesterday, and it makes my skin crazy. It's like I just had sex for four days.

I'm clean and sober for over a year and no one seems to care! They're like, 'Oh, her dramatic weight gain. ' So, stop making fun of me!

Being a rock widow is not my job, so I would hire people to do it for me.

Love is the core of everything - nothing survives without it.

Core, Everything, Love Is, Nothing, Survives

I want every girl in the world to pick up a guitar and start screaming.

I've done enough films to know how to save up my energy for the take and then give it on the take and do that.

My mentors are people like Cameron Crowe and Carrie Fisher.

You couldn’t pay me a billion dollars to take marijuana. I don’t really like coke anymore. I’m scared of ecstasy. The one drug I'd like to try one day is Ayahuasca, which should be mandatory for everybody. It’s apparently this crazy tea that gives you these intense hallucinations. Everyone who takes it sees a wise old black man who takes you on a wild journey. I’m not going to name names, but everyone who takes it sees the same black guy. I'm not kidding you. Everyone!

I am not a woman. I am a force of nature.

The language of love letters is the same as suicide notes.

You gotta be able to change worlds.

I'd definitely like to see less twerking and more power chords.

No one's coming in seeing my dogs, daughter or the crack of my ass, forget it.

I keep social with everyone because I want to know what's going on at every level. At the same time, if I'm not alone a certain amount of time per day then I'll go nuts, because I can't write and I can't think. I can't deal with people all the time. I like being alone. I'm a bit of a cat lady in that way.

I have no intention of dying young and being some stinking rock'n'roll person.