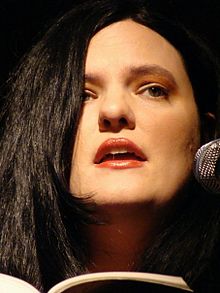 Catherynne M. Valente (born May 5, 1979) is an American fiction writer, poet, and literary critic. For her speculative fiction novels she has won the annual James Tiptree, Andre Norton, and Mythopoeic Fantasy Awards. Her short fiction has appeared in Clarkesworld Magazine, the World Fantasy Award–winning anthologies Salon Fantastique and Paper Cities, along with numerous Year's Best volumes. Her critical work has appeared in the International Journal of the Humanities as well as in numerous essay collections.

She sounds like someone who spends a lot of time in libraries, which are the best sorts of people.

Monsters almost always are culture's way of working out their fears.

She is so stubborn, her heart has an argument with her head every time it wants to beat.

I don’t want to be a Princess,” she said finally. “You can’t make me be one. ” She knew very well what became of Princesses, as Princesses often get books written about them. Either terrible things happened to them, such as kidnappings and curses and pricking fingers and getting poisoned and locked up in towers, or else they just waited around till the Prince finished with the story and got around to marrying her. Either way, September wanted nothing to do with Princessing.

Wishes of one's old life wither and shrivel like old leaves if they are not replaced with new wishes when the world changes. And the world always changes. Wishes get slimy, and their colors fade, and soon they are just mud, like all the rest of the mud, and not wishes at all, but regrets. The trouble is, not everyone can tell when they ought to launder their wishes. Even when one finds oneself in Fairyland and not at home at all, it is not always so easy to remember to catch the world in it's changing and change with it.

Oh, September! It is so soon for you to lose your friends to good work and strange loves and high ambitions. The sadness of that is too grown-up for you. Like whiskey and voting, it is a dangerous and heady business, as heavy as years. If I could keep your little tribe together forever, I would. I do so want to be generous. But some stories sprout bright vines that tendril off beyond our sight, carrying the folk we love best with them, and if I knew how to accept that with grace, I would share the secret.

Because I’m a cat. A big one, the Panther of Rough Storms, in fact. But still a cat. If there’s a saucer of milk to spill, I’d rather spill it than let it lie. If my mistress grows absent-minded and leaves a ball of yarn about, I’ll bat it between my paws, and unravel it. Because it’s fun. Because it’s what cats do best.

I hope, in years to come, I shall hold my heart up and it will be a pane of clear glass, through which I see all, but nothing is distorted.

No one is now what they were before the war. There’s just no getting any of it back.

September had never been betrayed before. She did not even know what to call the feeling in her chest, so bitter and sour. Poor child. There is always a first time, and it is never the last time.

You can never know how your clock runs. But it does run - and always faster than you think.

And it's the wonders I'm after, even if I have to bleed for them.

You should always listen to minotaurs. Anybody with four stomachs has to have a firm grip on reality.

At the snowy summit of all these things, however, is the fact that you simply cannot go about locking your siblings in towers when they misbehave. It is unseemly and betrays a sad lack of creativity.

Autumn is the very soul of metamorphosis, a time when the world is poised at the door of winter - which is the door of death - but has not yet fallen. It is a world of contradictions: a time of harvest and plenty but also of cold and hardship. Here we dwell in the midst of life, but we know most keenly that all things must pass away and shrivel. Autumn turns the world from one thing into another. The year is seasoned and wise but not yet decrepit or senile.

After love, no one is what they were before.

Why should he be spared?' 'Someone ought to be. ' And it will not be me. I have survived, but I have not been spared.

Ought, Should, Spared, Survived

Metamorphosis is the most profound of all acts.

I perceive that you have a cruel heart, my child. It lies within your breast like a smoldering blade, hissing steam at me.