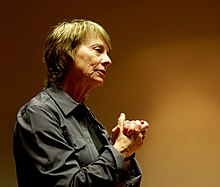 Camille Anna Paglia (/ˈpɑːliə/; born April 2, 1947) is an American academic and social critic. Paglia has been a professor at the University of the Arts in Philadelphia, Pennsylvania, since 1984. Paglia is critical of many aspects of modern culture, and is the author of Sexual Personae: Art and Decadence from Nefertiti to Emily Dickinson (1990) and other books. She is a critic of American feminism and of post-structuralism as well as a commentator on multiple aspects of American culture such as its visual art, music, and film history. In 2005, Paglia was ranked No. 20 on a Prospect/Foreign Policy poll of the world's top 100 public intellectuals.

Criticism at its best is re-creative, not spirit-killing.

Madonna remains the most visible performer on the planet, as well as one of the wealthiest, but would anyone seriously say that artistic self-development is her primary motivating principle? She is too busy with Kabbalah, fashion merchandising, adoption melodramas, the gym, and ill-starred horseback riding to study art.

Despite crime's omnipresence, things work in society, because biology compels it. Order eventually restores itself, by psychic equilibrium.

In an era ruled by materialism and unstable geopolitics, art must be restored to the center of public education.

Economic analysis is the first principle of Marxism. Professors who were genuine leftists would have challenged the entire economics-driven machinery of American academe the wasteful multidepartmental structure, the divisive pedantry of overspecialization, the cronyism and sycophancy in recruitment and promotion, the boondoggling ostentation of pointless conferences, the exploitation of graduate students and part-time teachers, the subservience of faculty to overpaid administrators, the mediocrity and folly of the ruling cliques of the Modern Language Association.

Gay men may seek sex without emotion; lesbians often end up in emotion without sex.

Mind is a captive of the body.

Even a woman of abnormal will cannot escape her hormonal identity.

Though men may be deep, mentally they are slow.

My prescription for women entering the war zone of the professions: study football. . . . Women who want to remake the future should look for guidance not to substitute parent figures but to the brash assertions of pagan sport.

Sotomayor's vainglorious lecture bromide about herself as 'a wise Latina' trumping white men is a vulgar embarrassment - a vestige of the bad old days of male-bashing feminism.

The Devil is a woman.

You have to accept the fact that part of the sizzle of sex comes from the danger of sex. You can be overpowered.

We live in a period of declining stars. Few celebrities these days (aside from the smoldering Angelina Jolie) seem to have complex psychic lives.

Aside, Days, Psychics, Stars, These Days

I want young women when they're 14 to start thinking about what they want over the course of their lives. I think it's criminal - child abuse - that they're not told to do this [in school]. Right now it's just sex education and putting condoms on bananas. Girls should be asked to think about what they want in their lives when they're 50, 60 and 70.

I'm for a high libido president! I applaud him if he gets up and picks up women.

Obama's folksy come-on is as bad as Madonna's faux British - and both are in need of fresh inspiration.

My generation of the Sixties, with all our great ideals, destroyed liberalism, because of our excesses.

Woman's sexuality is disruptive of the dully mechanical workaday world, in which efficiency means uniformity. The problems of woman's entrance into the career system spring from more than male chauvinism. She brings nature into the social realm, which may be too small to contain it.