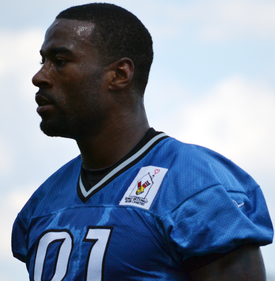 Calvin Johnson Jr. (born September 29, 1985) is a former American football wide receiver. He was drafted by the Detroit Lions of the National Football League, second overall in the 2007 NFL Draft, and played for the Lions for all of his professional career before he retired. He previously played college football at Georgia Tech, where he was twice recognized as an All-American.

I have my own people that make my clothes, because it's hard for me to find stuff that fits.

You didn't want to bring home anything but an A or a B. To my mom, a C was like an F.

There's times when you catch a ball and really didn't even see that ball. You're like, 'That couldn't have been all me. '

The old people, they struggled, they fought the elements, they fought everything was against them here. The river, the summers and the heat. So finally when they settled Hurricane there and got the water on that bench, most of them left.

The outpouring of support from health professionals who want to volunteer for Hurricane Katrina recovery efforts has been tremendous.

If our next president is a woman, it will be Hilary Clinton and our country will be all the better for it.

During the season, I dodge the media. After practice, I need to be taking care of my body and recovering.

D-Bo had a great game, so now a lot of teams, they're not sure what to do. They can't just key on me. They've got to key on both of us. D-Bo had a coming-out party.

I hoping to make it [decision] sometime next week. I love the academics at Tech. I can get a great degree there in engineering. Georgia has the ability to win it all next season. I think I can play early at both schools. It's going to be tough.

I am here to put out a positive athlete.

Hopefully I can finish my degree before I get done playing and work with my foundation.

I don't really get too frustrated. I know I'm going to get the ball.

You've got to be ready for everything. When it comes to everyone's opinion, that's what you've got to go through.

You can't get down and think things won't get better or they definitely won't.

I like to run the slants. The slants are cool. I like routes that you can catch the ball running.