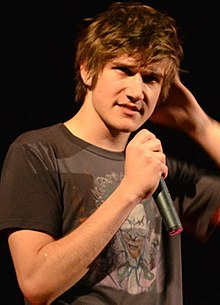 Robert Pickering Burnham (born August 21, 1990) is an American comedian, singer-songwriter, musician, rapper, actor, director, screenwriter, and poet. He began his performance career as a YouTuber in March 2006, and his videos have been viewed over 214 million times as of December 2017[update].

I'm a stand up comic and I always sit and slouch, and I got my girlfriend pregnant on my sterile uncles pull-out couch.

I think no matter what you do, a certain amount of people are going to call you a sellout, somehow, you know. If I ever start trying to make a living on it.

The thing is, I was on YouTube like the golden era, I think. Before ads came in, it was really cool back then.

In the distance, Bo saw a fairy. A fairy so beautiful that he felt proud of being called one in highschool.

When I tried to hit puberty I swung and I missed.

At the time of 'Words, Words, Words,' I'm a 19-year-old getting up feeling like he's entitled to do comedy and tell you what he thinks of the world, so that's inherently a little bit ridiculous.

I don't want to try to recreate for no reason. Like, me in my bedroom, singing songs to a camera was a special thing that was at that time in my life. But I'm just not that kid. I like the format of it, but I want to be able to release things for free.

I love you like a gay geneticist loves designer genes.

If comedy is about surprises, about tension, there's a lot of tension and surprise there, in the fact that people are expecting this to be natural.

If I had a dime for every time a homeless guy asked me for change, I'd still say no.

Humour is often linked to shared experience. Like, a guy gets up and says, "Have you noticed public restrooms have really inefficient hand-dryers?" Oh my God, yes I have, hahaha, really good point, they should. . . fix that. It's good to know that somebody finally gets me!

My persona is most importantly just to communicate the material in a way that is most funny and meaningful in the moment. It's more like a character that's sculpted for whatever joke needs communicating at the moment.

And an anteater plus a large hungry mutant ant? An ironic way to die.

I do think that stand-up comedy in general heavily favors masculinity and so I like to act a little feminine onstage.

People do complain about the way I act on stage. . . They think on stage I act too arrogant, too self-obsessed, solecistic, self-contained, synonyms.

Comedy should be a source of positivity. I don't want to bully people, and I don't want people to come to my show to feel terrible about something. I'm actually very open to having a conversation about what I should or shouldn't say.