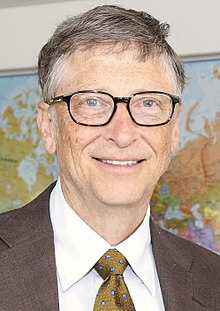 William Henry Gates III (born October 28, 1955) is an American business magnate, investor, author, philanthropist, humanitarian, and principal founder of Microsoft Corporation. During his career at Microsoft, Gates held the positions of chairman, CEO and chief software architect, while also being the largest individual shareholder until May 2014.

If you're taking care of your family and society and are comfortable you can start to think about helping those most in need globally. That's how we became engaged in those things.

We all sort of do want incentives for creative people to still exist at a certain level. You know, maybe rock stars shouldn't make as much; who knows? But you want as much creativity to take place in the future as took place in the past.

I'm sorry that we have to have a Washington presence. We thrived during our first 16 years without any of this. I never made a political visit to Washington and we had no people here. It wasn't on our radar screen. We were just making great software.

It was really phenomenal [Warren Buffett donation]. It grew out of the friendship that we had and the fact that his plan to have his wife run the foundation and give things away changed when she tragically died.

When you say that after World War I there was a pandemic that killed more people than the war itself, most will say: "Wait, are you kidding? I know World War I, but there was no World War 1. 5, was there?" But people were traveling around after the war, and that meant the force of infection was much higher. And the problem is that the rate of travel back then was dramatically less than what we have nowadays.

Leaders need to provide strategy and direction and to give employees tools that enable them to gather information and insight from around the world. Leaders shouldn't try to make every decision.

Death is something we really understand extremely well.

Drones overall will be more impactful than I think people recognize, in positive ways to help society.

If something is expensive to develop, and somebody's not going to get paid, it won't get developed. So you decide: Do you want software to be written, or not?

SPAM is taking e-mail, which is a wonderful tool, and exploiting the idea that it's very inexpensive to send mail.

Kids are taking PCs and the Internet to new heights. They're the ones that are designing the cutting-edge web sites.

Car, Electric, People, Would Be

If you're asking whether I intentionally mess up my hair, no, I don't. And certain things, like my freckles, they're just there. I don't do anything consciously. I suppose I could get contact lenses. I suppose I could comb my hair more often.

Ridiculous sums of money can be confusing.

Microsoft is always two years away from failure.

If you were born poor, it's not your fault. But if you die poor it is.

The kids are a big part of my schedule.

The willingness to hear hard truth is vital not only for CEOs of big corporations but also for anyone who loves the truth. Sometimes the truth sounds like bad news, but it is just what we need.