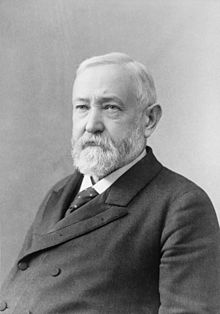 Benjamin Harrison (August 20, 1833 – March 13, 1901) was an American politician and lawyer who served as the 23rd president of the United States from 1889 to 1893. He was a grandson of the ninth president, William Henry Harrison, creating the only grandfather-grandson duo to hold the office. He was also the great-grandson of Benjamin Harrison V, a founding father. Before ascending to the presidency, Harrison established himself as a prominent local attorney, Presbyterian church leader, and politician in Indianapolis, Indiana. During the American Civil War, he served in the Union Army as a colonel, and was confirmed by the U.S. Senate as a brevet brigadier general of volunteers in 1865. Harrison unsuccessfully ran for governor of Indiana in 1876. The Indiana General Assembly elected Harrison to a six-year term in the U.S. Senate, where he served from 1881 to 1887.

I'd rather have a bullet inside of me than to be living in constant dread of one.

Sir, I wish to understand the true principles of the Government. I wish them carried out. I ask nothing more.

Will it not be wise to allow the friendship between nations to rest upon deep and permanent things? Irritations of the cuticle must not be confounded with heart failure.

We Americans have no commission from God to police the world.

Lincoln had faith in time, and time has justified his faith.

The evil works from a bad center both ways. It demoralizes those who practice it and destroys the faith of those who suffer by it in the efficiency of the law as a safe protector

That one flag encircles us with its folds today, the unrivaled object of our loyal love.

Have you not learned that not stocks or bonds or stately houses, or products of the mill or field are our country? It is a spiritual thought that is in our minds.

I am thorough believer in the American test of character. He will not build high who does not build for himself.

I pity the man who wants a coat so cheap that the man or woman who produces the cloth will starve in the process.

The indiscriminate denunciation of the rich is mischievous. . . . No poor man was ever made richer or happier by it. It is quite as illogical to despise a man because he is rich as because he is poor. Not what a man has, but what he is, settles his class. We can not right matters by taking from one what he has honestly acquired to bestow upon another what he has not earned.

The disfranchisement of a single legal elector by fraud or intimidation is a crime too grave to be regarded lightly.

If you take out of your statutes, your constitution, your family life all that is taken from the Sacred Book, what would there be left to bind society together?

There is no constitutional or legal requirement that the President shall take the oath of office in the presence of the People but there is so manifest an appropriateness in the public induction to office of the chief executive officer of the nation that from the beginning of the Government the people to whose service the official oath consecrates the officer, have been called to witness the solemn ceremonial

No other people have a government more worthy of their respect and love or a land so magnificent in extent, so pleasant to look upon, and so full of generous suggestion to enterprise and labor.

I knew that my staying up would not change the election result if I were defeated, while if elected I had a hard day ahead of me. So I thought a night's rest was best in any event.