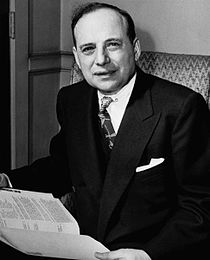 Benjamin Graham (/ɡræm/; né Grossbaum; May 9, 1894 – September 21, 1976) was a British-born American investor, economist, and professor. He is widely known as the "father of value investing," and wrote two of the founding texts in neoclassical investing: Security Analysis (1934) with David Dodd, and The Intelligent Investor (1949). His investment philosophy stressed investor psychology, minimal debt, buy-and-hold investing, fundamental analysis, concentrated diversification, buying within the margin of safety, activist investing, and contrarian mindsets.

We urge the beginner in security buying not to waste his efforts and his money in trying to beat the market. Let him study security values and initially test out his judgment on price versus value with the smallest possible sums.

Abnormally good or abnormally bad conditions do not last forever.

The true investor. . . will do better if he forgets about the stock market and pays attention to his dividend returns and to the operation results of his companies.

Most of the time common stocks are subject to irrational and excessive price fluctuations in both directions as the consequence of the ingrained tendency of most people to speculate or gamble. . . to give way to hope, fear and greed.

If I have noticed anything over these 60 years on Wall Street, it is that people do not succeed in forecasting what`s going to happen to the stock market.

Cartels have spread and will spread as long as the world lacks an effective mechanism by which balanced expansion may be achieved without a resulting disruption of prices.

To achieve satisfactory investment results is easier than most people realize; to achieve superior results is harder than it looks.

Price fluctuations have only one significant meaning for the true investor. They provide him with an opportunity to buy wisely when prices fall sharply and to sell wisely when they advance a great deal.

The investor with a portfolio of sound stocks should expect their prices to fluctuate and should neither be concerned by sizable declines nor become excited by sizable advances. He should always remember that market quotations are there for his convenience, either to be taken advantage of or to be ignored.

Price statistics show clearly that instability in raw-material prices is a prime cause of instability of other prices.

In the short run, the market is a voting machine, but in the long run it is a weighing machine.

Undervaluations caused by neglect or prejudice may persist for an inconveniently long time, and the same applies to inflated prices caused by over-enthusiasm or artificial stimulants.

The most realistic distinction between the investor and the speculator is found in their attitude toward stock-market movements. The speculator's primary interest lies in anticipating and profiting from market fluctuations. The investor's primary interest lies in acquiring and holding suitable securities at suitable prices. Market movements are important to him in a practical sense, because they alternately create low price levels at which he would be wise to buy and high price levels at which he certainly should refrain from buying and probably would be wise to sell.

No matter how careful you are, the one risk no investor can ever eliminate is the risk of being wrong. Only by insisting on what Graham called the "margin of safety" - never overpaying, no matter how exciting an investment seems to be - can you minimize your odds of error.

The genuine investor in common stocks does not need a great equipment of brain and knowledge, but he does need some unusual qualities of character

Wall Street people learn nothing and forget everything.

In the old legend the wise men finally boiled down the history of mortal affairs into a single phrase: 'This too will pass. '