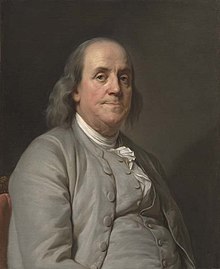 Benjamin Franklin FRS FRSE (January 17, 1706 [O.S. January 6, 1705] – April 17, 1790) was an American polymath and one of the Founding Fathers of the United States. Franklin was a leading author, printer, political theorist, politician, freemason, postmaster, scientist, inventor, humorist, civic activist, statesman, and diplomat. As a scientist, he was a major figure in the American Enlightenment and the history of physics for his discoveries and theories regarding electricity. As an inventor, he is known for the lightning rod, bifocals, and the Franklin stove, among other inventions. He founded many civic organizations, including Philadelphia's fire department and the University of Pennsylvania.

When you taste honey, remember gall.

Drink does not drown care, but waters it, and makes it grow faster.

I think that humanity brings much misery on itself by the false value they put on things.

The problem with doing nothing is not knowing when you're finished.

Make no expense but to do good to others or yourself.

A learned blockhead is a greater blockhead than an ignorant one.

There is no gains without pain.

Read much, but not too many books.

Those have a short Lent who owe money to be paid at Easter.

'tis his honesty that brought upon him the character of a heretic.

By playing at Chess then, we may learn. . . First: Foresight. Second: Circumspection. Third: Caution.

Death is a fisherman, the world we see His fish-pond is, and we the fishes be; His net some general sickness; howe'er he Is not so kind as other fishers be; For if they take one of the smaller fry, They throw him in again, he shall not die: But death is sure to kill all he can get, And all is fish with him that comes to net.

The generous Mind least regards money, and yet most feels the Want of it.

A virtuous heretic shall be saved before a wicked Christian.

Thinking aloud is a habit which is responsible for most of mankind's misery.

Eyes and Priests Bear no Jests.

To succeed, jump as quickly at opportunities as you do at conclusions.